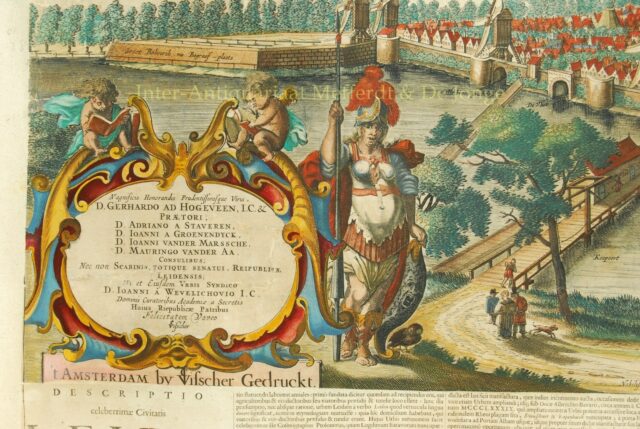 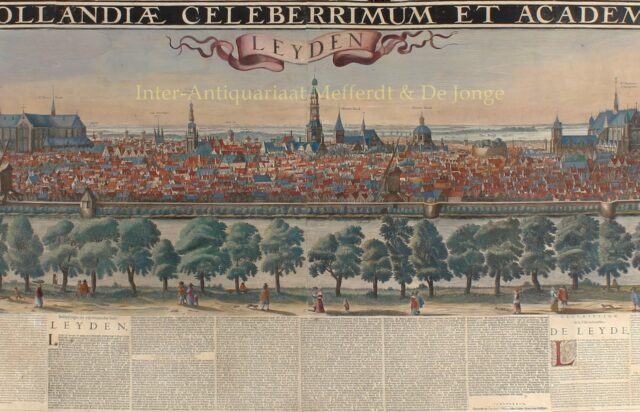 ONE OF THE MOST BEAUTIFUL PANORAMIC VIEWS OF LEIDEN EVER MADE.

“Lugdunum Batavorum Hollandiae Celeberrimum Et Academia Florentissima”. Copper engraving made in 1647 by Jacob Salomonsz Savary (1617-1666) after a drawing of Claude Rivet of 1640, on 4 mounted sheets, with the title in woodcut. Below, 18 columns on 6 sheets with the description of the “widely famous city of Leiden” in Latin, Dutch and French. Published by Claes Jansz. Visscher in 1650. Original handcolouring with later additions. Size: 59 x 212 cm. (Frame: 83 x 240 cm)

When Joan Blaeu published his townbook at the end of the Eighty Years’ War, this panoramic view of Leiden from the south was made, on four large sheets.

In the lower left corner the engraving is dedicated to the governors of the city and university of around 1646. Two reading putti and the goddess of wisdom Pallas (in auricular style), decorate the cartouche. The names of the main buildings are mentioned directly in the view. At the top left we see the coat of arms of Holland with the lion, at the top right there’s the coat of arms of Leiden with the keys. The embellishment of the print was beautifully made and shows the clothes of the time. The architecture is depicted accurately, except for a few details, such as the top of the southern transept of the Hooglandse Kerk, which is represented with onion-shaped forms. The rightmost (fourth) sheet of the engraving is important, because it shows us the situation on the east side of the city (between Nieuwe Rijn and Oude Rijn) after 1644 and before the last extension of 1659. Also one gets a good impression of the old Hogewoerd gate at the Kraaierstraat.

Claude Rivet (1603 -1647), son of the famous theologian André Rivet, was registered as a student at the University of Leiden on 1 October 1620. He was in the service of Frederick Henry, Prince of Orange as “nobleman ordinaris” and as an engineer of “His Majesty of France”. We know that 150 guilders were paid to Claude Rivet on April 23, 1640, for making this stunning piece.