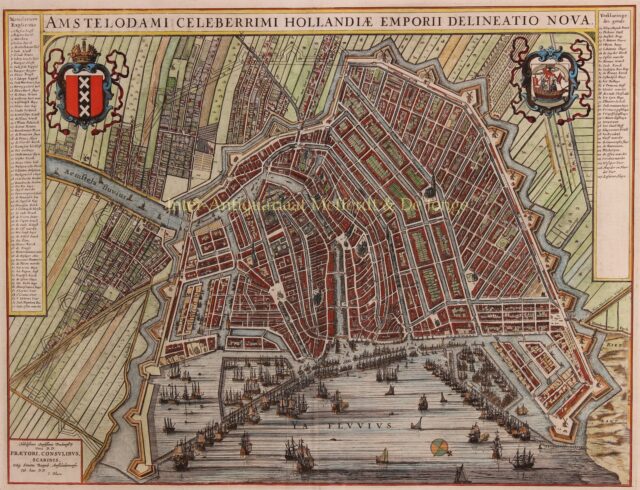 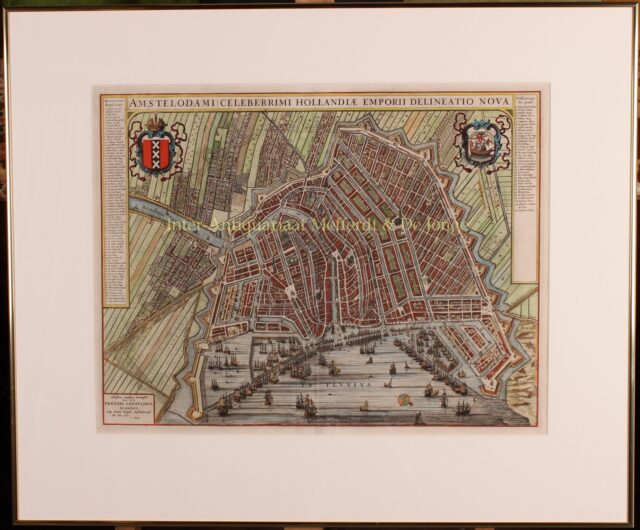 17TH CENTURY PLAN OF AMSTERDAM BY THE  JOAN BLAEU, THE MOST CELEBRATED MASTER- CARTOGRAPHER EVER

Very attractive bird’s-eye view of the most important 17th century European city, made at the height of Dutch cartography, during Amsterdam’s Golden Age as one of the leading trading empires of Europe.

The river Amstel is still an open water flowing through the heart of the city. Only near the Dam square it has been covered by the stock exchange and the fishmarket. The plan shows the city and its canals enclosed within the medieval town walls. There were plans to expand the city and Blaeu has drawn the new town walls with its bastions in the south- and east side of the city to show the area to be enclosed on completion of the construction. Numerous small buildings are shown and windmills are on the city walls.

The map’s side panels to the left and right give a key with 107 different numbered locations. In the foreground are numerous sailing ships and docks fill the busy port. The city’s coat of arms is in the upper left corner the city’s seal in the upper right.

Joan Blaeu produced this map for “Toonneel der Steden van de Verenigde Nederlanden“ [Town Atlas of the Low Countries] in 1649, largely to commemorate Dutch independence from Spain at the conclusion of the Eighty Years’ War.