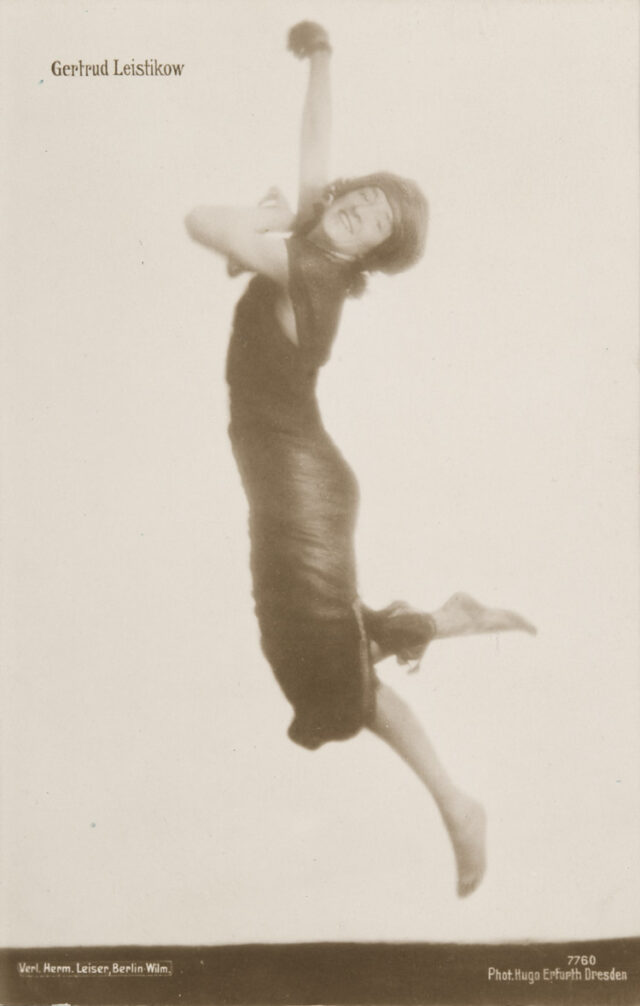 Gertrud Leistikow was born on 12 September 1885 in Bückeburg, Germany. She studied at the Academy of Applied Arts in Dresden and would later continue her training in Berlin.

Leistikow began to dance between 1906 and 1910 and soon drew condiderable crowds in St. Petersburg, Moscow, Lausanne, Utrecht and Sarajevo. In the summer of 1914 Leistikow joined Rudolf von Laban’s troupe in Ascona, where she had a major role in Von Laban’s dance drama Der Sieg des Opfers next to Mary Wigman. In that year she also performed in the Netherlands for the first time, where there was a lot of interest for her shows. An article on her appeared in Dutch art magazine Wendingen, and the appreciation she got may have played a role in her decision to settle in The Netherlands. In 1921 she married a rose grower from Aalsmeer.

Leistikow often performed during these years, but also started focussing on teaching. She opened dance schools in Amsterdam, Rotterdam and The Hague. After the birth of her son in 1925, she spent most of her time teaching. On June 5, 1929 a (first) farewell evening was held in the Amsterdam Stadsschouwburg. There were several to follow. After she returned from a two-year stay in the Dutch East Indies, she opened another dance school at Amsterdam Stadhouderskade. Leistikow would countinue to teach there until her death in 1948.

Leistikow’s dance was all about improvisation. The body had to follow the soul organically. According to contemporaries her strength was not her virtuoso technique, but the dramatic intensity of her performances. Initially, Leistikow had a preference for the tragic and melancholic, later she shifted to the grotesque. As accompanying music, she usually chose from the nineteenth-century Romantic repertoire and folk songs. Dutch dance critic Werumeus Buning was a great admirer of Leistikow. He characterized her dance as fluent, soft and musical, where “the beautiful floating life of her arms remains an everlasting memory”.

Her poster “Gertrud Leistikow Tanzspiele” was designed by Austrian born artist Emil Pirchan (1884-1957). Pirchan was one of the most important designers of applied arts of the German-speaking world in the early 20th century. His designs for theater, opera and film, his numerous posters, illustrations and graphics were groundbreaking. Pirchan was recognized for excellence with the golden Fügermedaille and the Vienna Academy Master Award.