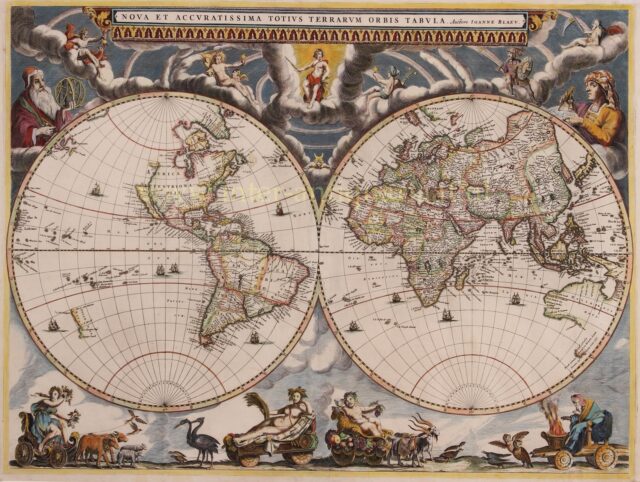 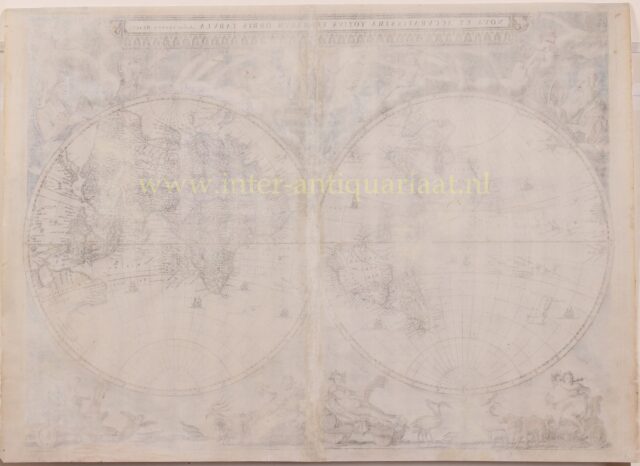 Joan Blaeu‘s highly important map of the world in double hemispheres was used only in the magnificent Atlas Maior, a book for kings and princes, a grand showpiece, the most expensive and impressive book of the day, in twelve volumes containing more than 600 maps. It is the first and best map of the most magnificent work of its kind ever. It replaces the rectangular world map with decorated borders that his father Willem had produced as early as 1606, and which is all other atlases of the Blaeu publishing firm. For this reason, the map is much rarer than the world map by the Blaeu family in Mercator projection.

Under the two hemispheres are allegoric representations of the four seasons, a popular motif in Dutch graphic art. It expresses the need of mankind to establish order in the world.

Spring is on the left, represented by a young girl holding flowers, riding a chariot that is drawn by baby calves and lambs, typically born in spring. Next to her is summer, a woman (probably Demeter, the goddess of harvest and agriculture), holding wheat and riding a chariot drawn by storks and doves. Storks as the symbol of birth and new life, doves for love. Autumn shows the triumph of Bacchus, or Dionysus, the god of grape-harvest, winemaking and wine, and of fertility. He is riding a chariot drawn by goats and doves. Goats were a symbol of fertility and goat skins were used for wine bottles when travelling. Winter is on the right, allegorically depicted by an old man warming his hands on a brazier set on a chariot drawn by owls and peacocks, symbols of wisdom and guidance.

The hemispheres are flanked by Claudius Ptolemy on the left, holding an armillary sphere and a pair of dividers, and Marinus of Tyre on the right, holding a globe and a pair of dividers. They represent the ancient sciences of the heavens and the earth, astronomy and geography. Interestingly, Joan Blaeu’s father Willem Janszoon Blaeu had studied mathematics and astronomy with Tycho Brahe at his observatory on the island of Ven in Denmark, and had published detailed instruction books on the use of armillary spheres and spherical astrolabes.

The grand celestial scene in the upper section of the map has a mythological content, combining the seven planets with the gods of Mount Olympus, home of the gods of the overworld.

The figure on the left is Jupiter (Zeus), depicted with his symbols of the eagle and the bolts of lightning. Being the king of all gods and ruler of the overworld, he wears a crown and carries a sceptre.

Next to him is Venus (Aphrodite), the goddess of love. She is holding a burning heart of love. Her son Cupid and his arrow accompany her.

The following figure in the clouds with his petasus (winged helmet) caduceus (staff with intertwined snakes) is Mercury (Hermes), messenger to the gods and protector of trade and negotiation.

Mars (Ares), the god of war and also an agricultural guardian, is shown with his typical attributes of his helmet, shield and sword.

The old man in the upper right, with a scythe, depicts Saturn (Cronus), the forefather of the classical gods, also god of agriculture and harvest, and a symbol of the passing of time and history. Because of a prediction that one day a mighty son would overthrow him, he ate all of his children when they were born to prevent this. Cronus’ wife Rhea hid her sixth her sixth child, Zeus, and offered him a large stone wrapped in clothes which he promptly devoured. Zeus later managed to overthrow him.

These gods corresponded the five known planets, to complete the series of the seven known bodies of the solar system, loosely referred to as the seven planets, the sun is depicted in the upper centre, brightly featuring as a halo for Christ, seated on his heavenly throne, with a sceptre emphasizing his ruling of the universe.

The figure below Christ represents the moon, between the northern hemispheres. It is Satan, the anti-Christ, in the form of Lucifer, the fallen angel, with the crescent moon symbolizing his horns.

As often in 17th century Dutch iconography, from all the important gods of mythology two are missing, namely Neptune (Poseidon), god of the sea, and Pluto (Hades), ruler of the underworld, but this is a representation of the seven planets and a depiction of the Olympus or home of the gods. Jupiter, Neptune and Pluto were brothers who together presided over the realms of heaven, the earthly world and the underworld. Note that the distant planets Uranus, Neptune and Pluto were not discovered or identified as planets until the 1800s and 1900s, and were accordingly named after Roman gods.

The map has been lauded as the finest expression of Dutch cartography at the highest point of its development. Nearly all areas of the world have been carefully redrawn to incorporate the latest information out of Dutch and other voyages of discovery to which Joan Blaeu had access in his role as chief cartographer to the East India Company. Blaeu’s world outline thus established a pattern which was followed by virtually all succeeding maps until the last decade of the century.