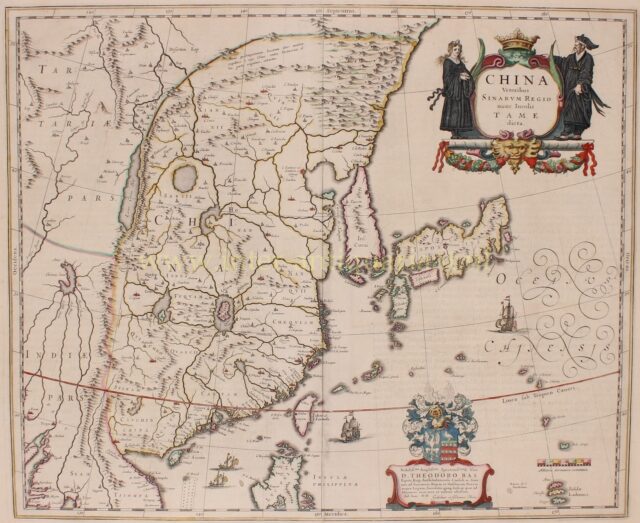 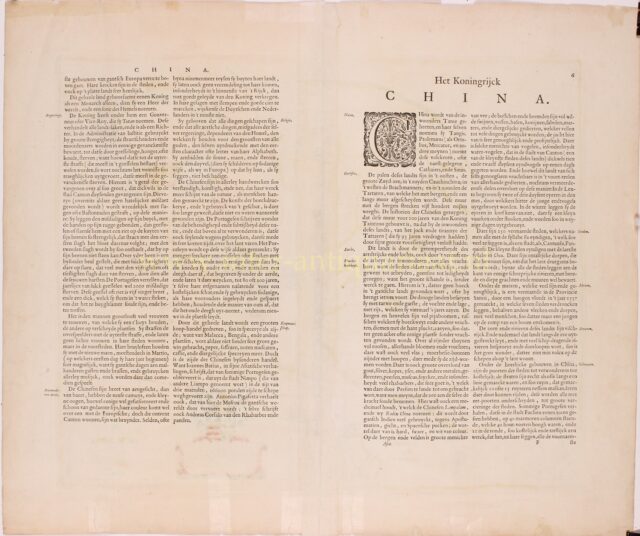 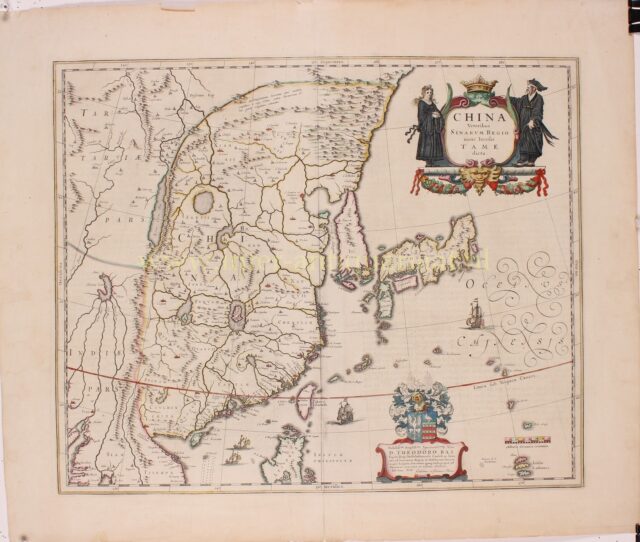 We see the eastern part of China bounded by the Great Wall to the west. Korea is depicted as an island. Dutch merchants and Chinese junks are sailing in the “Chinese Ocean”.

The country is described on the back. An interesting collection of facts giving insight on how Europeans in the 17th century viewed and respected China.

“The Great Wall of China, including the mountains, stretches for five hundred miles. According to Chinese history, this wall was built 200 years ago by King Tzintzoo, after he freed the inhabitants of the country from the yoke and tyranny of the Tatars (which they had to endure for 93 years).

The land is fertile for all kinds of things, because of the temper of the earth and air, but also because of the ingenuity and labour of its inhabitants. For the men are industrious there and accustomed to work, and in no way inclined to idleness, for it is a great shame not to have work. It is for this that there is not a corner in the land, or it produces something. They sow the dry lands with wheat and barley, the moist and lowlands with rice, which is planted four times a year. The mountains and hills are full of pine trees, between which buckwheat and fruit is grown, so that no field or land is left unused. There are gardens full of roses, all kinds of flowers and fruits. There is also a lot of flax and mulberry trees on which silkworms are fed.

There is a great abundance of gold, silver, copper, iron and other metals, stones, pearls, musk (of which perfume was made), sugar, great amounts of rhubarb, which is very sweet and is brought to us from China through Persia. The land also grows a medicinal wood “Lampalam”, which we call Radix China and is used throughout India against “aposthumations” [ulcers], gout and Spanish smallpox [syphillis].

In the mountains and fields there is a lot of livestock and there are forests and grasslands full of wild boars, foxes, hares, rabbits, sable martens and similar animals. The hides of which are used for many things. The hunt for them is very pleasurable and profitable. There are so many birds, especially waterfowl, that 10.000 to 12.000 ducks are eaten in one day in the city of Canton (one of the smallest cities in the country). And although the land itself is fertile, all kinds of animals are also bred. In the spring, for example, they bury 2.000-3.000 eggs in manure, which then are incubated by the heat. In winter, eggs are laid in wicker baskets, under which a small fire is lit and the eggs hatch in a few days.

Among the glorious buildings in China, the gates of the cities are admirable and beautiful. The streets are as straight as if they were made along a ruler, and so wide that 10 or 15 horsemen can easily ride side by side. The cities are distinguished with gates of honour, which make the cities very beautiful. Some Portuguese say they saw a tower in the city of Fuzhou standing on 40 marble columns, 40 feet high and 12 feet in circumference. A building so rich and magnificent, that it seems to be more beautiful than any building in Europe.

The entire land has a king as a monarch, whom they call Lord of the World and Son of Heaven. The king has a governor under him, a vice-roy whom they call “Tutan“. He is concerned with all land matters and is a sort of judge.

The enforcement of the laws is very strict. Street violators and murderers are imprisoned until they die of flogging, starvation or cold. That is why the number of prisoners is so great everywhere. There are thousands of prisoners in Canton, for example. Theft is cruelly punished with whipping or caning, as follows: they lay the criminal on his stomach with hands tied behind his back. Then they whip or beat him on the calves of his legs with a cane. So hard that it starts to bleed on the first blow. After the second blow, he can no longer stand on his feet. At each leg an executioner is beating so violently that most die at the fiftieth or sixtieth stroke because nerves burst. The Portuguese say that every year up to two thousand criminals die in this way. The scourge or caneis five fingers wide and one finger thick, and is repeatedly made wet because it makes it more pliable and therefore more painful.

It is lawful for men to marry many women, keeping one at home and the others elsewhere. Adultery is punishable by the “extreme penalty” and ‘ladies of easy virtue‘ are not allowed to live in the cities, but in the suburbs. Weddings are held at New Moon, especially in the month of March (the first day of the Chinese New Year), there is magnificent partying and brawling all day long with all kinds of music and comedies are played.

The Chinese are broad-faced, with a thin beard, a flat nose and small eyes, but some are well-mannered and beautiful. The skin colour is similar to European, but the people living around Canton are a bit browner. Rarely, if ever, do they travel outside of their country, nor do they allow strangers into the empire except with the king’s permission.

In their “laughter and drink” and hospitality they are no different from the Germans and Dutch.

They believe that all things are created and that all earthly things, including their government, depend on Heaven, which they consider to be the greatest god. They worship the sun, moon, and stars, as well as the devil (who they portray just as we do in Europe) so that he will not harm them.

The Chinese are so skilled, artful and neat in what they make, that it seems as if it was not made by man but by nature. The printing press and the use of artillery have been around for so long that it is not known when it was invented. The Portuguese write in amazement about the agility and subtlety of this nation and the most special thing is that they use “sand yachts” with which they move quickly over the land.

About the porcelain that is made: they mix a certain kind of sea mussels or snails with eggshells and a few other things and they knead it into a dough. What they make of it is buried under the earth and left for weeks, sometimes for 80 or 100 years, as a beautiful treasure for the heirs.

Throughout the country there is a lot of trade, in spices and in silk. The trade on Malacca, Bengal and elsewhere generates a lot of profit with pepper, saffron, nutmeg, coffee and similar spices. But Chinese silk is the most special merchandise, of which 166.000 pounds are shipped every three months. The whole world is also supplied with musk from China, as well as with rhubarb and pearls.”