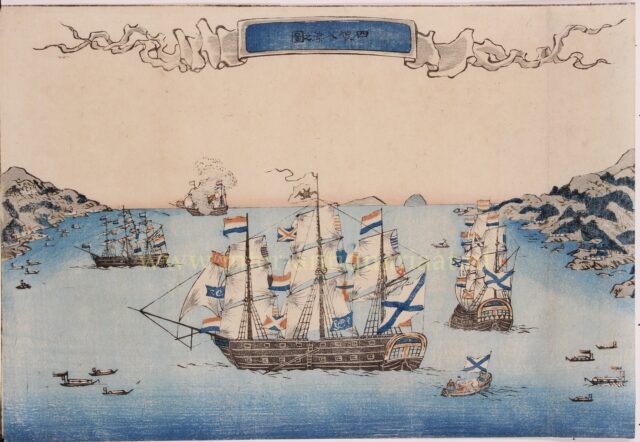 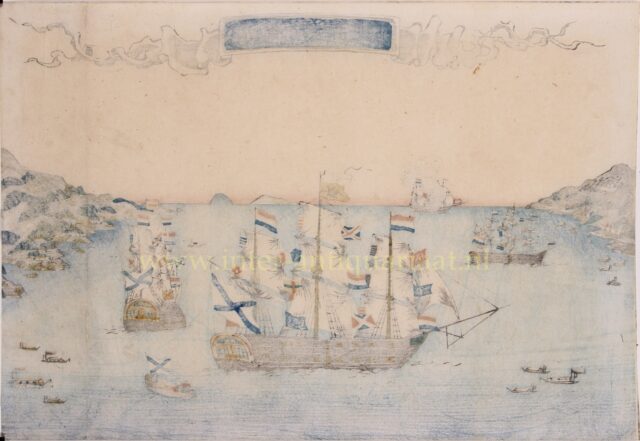 We see western merchant ships in Nagasaki Bay. Only the artist was not very knowledgeable about foreign ships. The flags are not quite right. There are flags of the Netherlands, France, Great Britain, United States the House of Habsburg and of the Russian navy, everything is mixed. It was a spectacle for Japanese viewers – the buyers of prints like these – to see these foreign ships saluting in the bay.

The print may have been issued shortly after 1858, when Japan signed trade agreements with the US, Great Britain, France, the Netherlands and Russia, and provided for the construction of Yokohama harbour. However, the island formations and other topographic features here indicate that this scene depicts Nagasaki Bay.

From the 1630s to the mid-nineteenth century, Japan was virtually closed to foreigners. From 1641 the Dutch were the only Westerners allowed to stay and trade there. They had to follow strict regulations, and were allowed to live only on Dejima, an artificial island in the harbour of Nagasaki.

Each year, one or two ships arrived in Nagasaki to deliver and collect merchandise and relieve the trading post crew. The arrival of the ships was a welcome change from the monotonous life on Dejima.

The ships themselves, with their richly decorated sterns and colorful flags, were a quitre a sight to the Japanese. Impressive were the speed with which the ships could be rigged and the sails raised, as well as the heavy cannons with which salute shots were fired and envelopped them in clouds of smoke.

This is a so-called Nagasaki-e (長崎絵), a woodcut related to Nagasaki. They were popular in the Edo period (1603-1868) and often depict foreigners or their foreign objects, such as ships. The “red-haired barbarians” were a sight to behold, and the prints filled a need. The Japanese government had appointed painters to Dejima with the task of documenting the daily life of the Dutch. Their work has appeared in print form and was bought as souvenirs by Japanese travelers during their stay in Nagasaki. Due to the fragility of the thin paper they were printed on, they have become rare today.

The provenance of the print is interesting. It belonged to Major General Jean Charles Pabst (1873-1942) of the Royal Netherlands East Indies Army and envoy to Japan from May 1923 to January 1942. On his death Pabst bequeathed his collection to Charles Boxer (1904-2000), British historian, former soldier in Japan and spy in Hong Kong and an authority on Dutch and Portuguese 16th and 17th century maritime and colonial history. After Boxer’s death, a large part of the collection were given  to the British Museum.