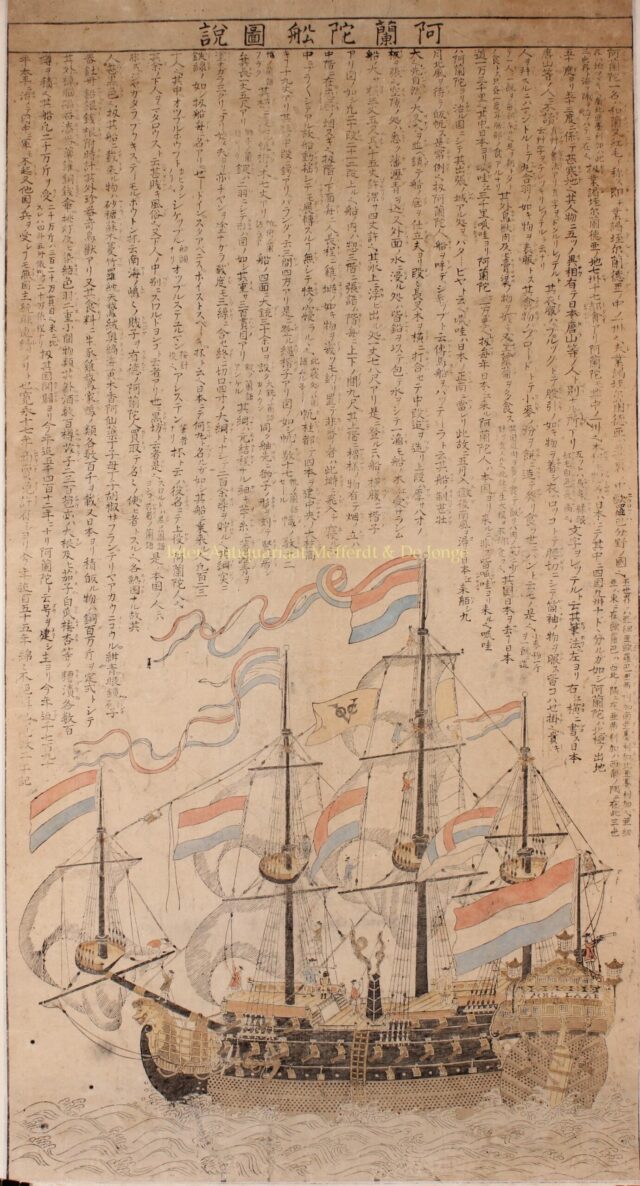 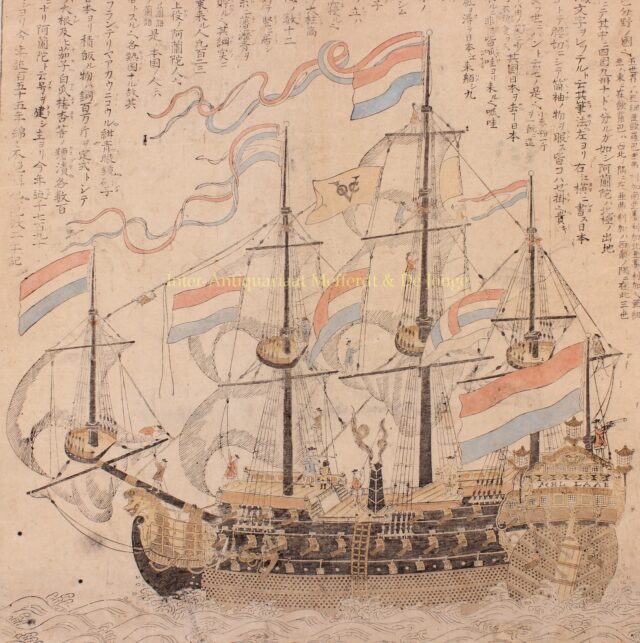 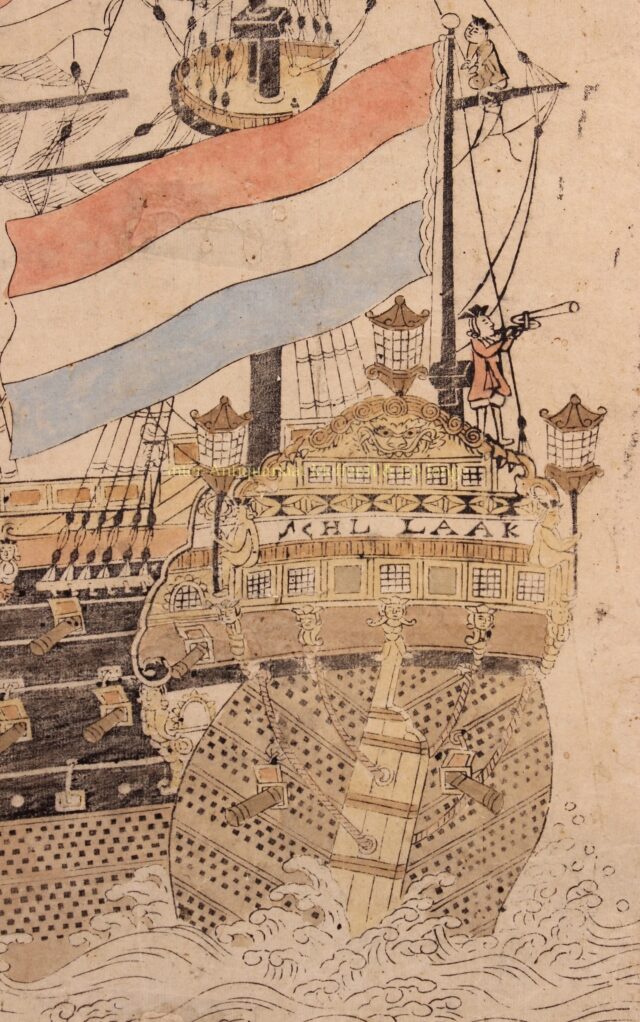 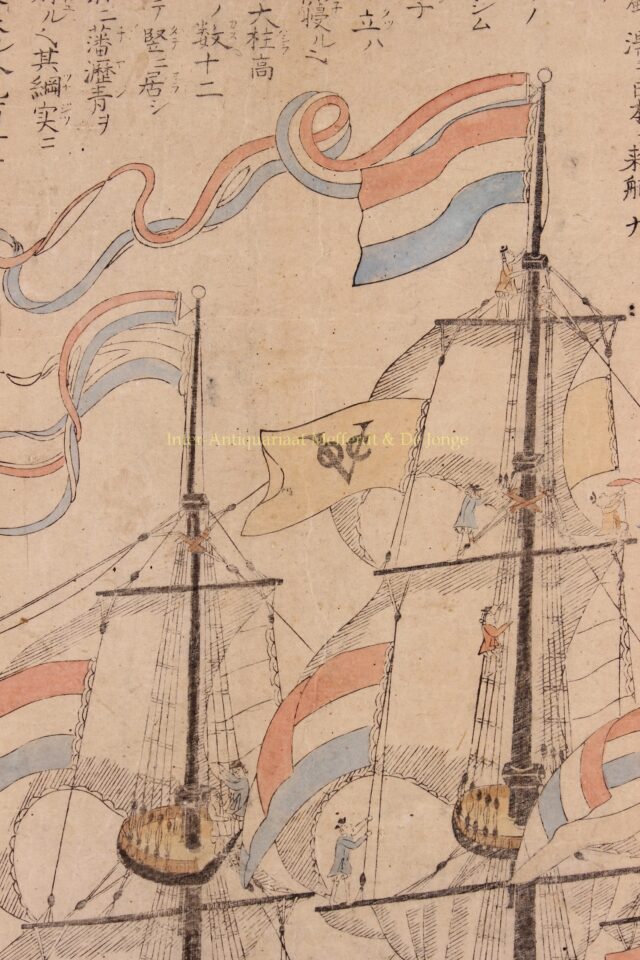 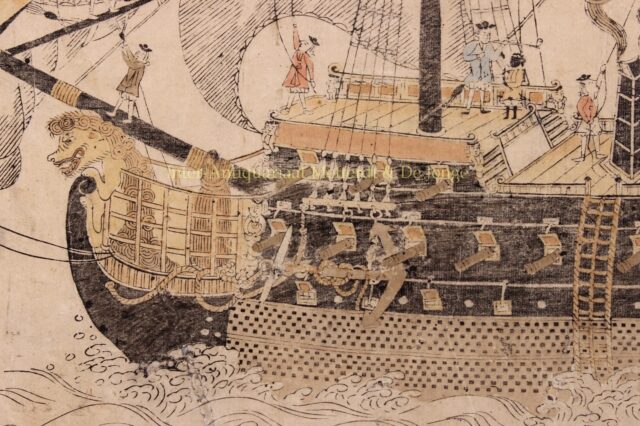 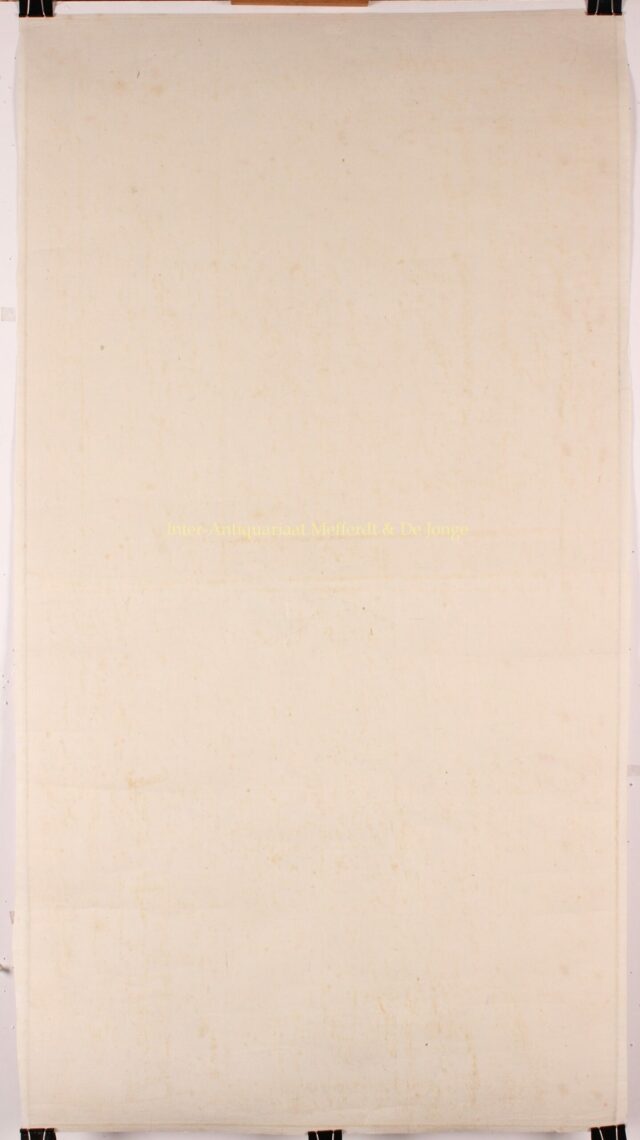 Travellers to faraway destinations often bring home souvenirs to commemorate their experiences. In 18th century Japan, that souvenir sometimes captured a unique moment in time, such as this 1790 Japanese woodcut print featuring the Schellak, a Dutch East Indiaman under sail.

It is a rare example of Nagasaki-e, colour prints made from woodblocks and published in 17th and 18th century Nagasaki prefecture in Kyushu, depicting the Dutch, their ships or their exotic animals.

The Dutch East India Company, also known as the VOC (Vereenigde Oost-Indische Compagnie), carried on exclusive European trade with Japan for 250 years, albeit restricted to the small, man-made island of Dejima in Nagasaki harbour. Nagasaki-e were made for and bought by Japanese who would have regarded visiting Nagasaki and seeing the foreign black ships and red-haired “barbarian” crews as the trip of a lifetime.

The Schellak, one of several VOC ships that arrived in Dejima every year to trade, is under full sail and with cannons ready to fire. The ship’s name (erroneously written as Schllaak) is across the stern, the dynamic rendering portrays it ploughing a frothy wake through the sea. On board, sailors scamper through the rigging, unfurling flags and banners, hoisting sails and trimming sheets. Officers on deck keep watch through a spyglass, convey orders to a blackamoor and hold command, legs firmly planted with hands on hips. The captain meanwhile, smokes a pipe.

Printed in monochrome and published by Tomishima Denkichi of Nagasaki, the colours of the Dutch flags, red coats of the crew and other details were applied afterwards by hand. However, the charm of this print is not only in the artistry or the skill level of the woodblock craftsmanship. It is found also in the Japanese inscription above the ship, written with a certain entertainment value.

The artist Hayashi Shihei (1738-1793) was a famous loyalist and military scholar of the latter Tokugawa period and his observations are made through the eyes of a samurai. He describes Holland, “the name of one of the provinces of the Netherlands,” as akin to Kyushu and situated “to the North West of the World.”

“This country lies a long way from Japan 13.000 ri [more than 51.000 km] – by our reckoning. Now the Hollanders who come every year to Japan all come from Java and none from Holland. Java has been conquered by the Hollanders who have their chief fortress at Batavia, this corresponds to the Redhair settlement at Dejima in Japan. Java lies south of Japan therefore they come in the rainy season of the fifth month with the south wind and after importing their products leave again with the north wind in the ninth month. This is done regularly.

Now the Hollanders call their ships skippu (NL: schip). Their build is very imposing. To begin with they make the ship’s hull from big timbers, next they fix in crosswise, square blocks of chestnut wood; then they caulk up the seams with pitch and tar. All of the hull below the waterline is sheathed in lead. The ship’s beam is 3 jo (9m); length 15 jo (45m); draught 3 jo 8 shaku (11,4m). All are three decked ships; distances between decks 9 shaku (2,73m). Altogether there are four masts. The height of the main mast is 19 jo (57,6m). There are 17 sales altogether, and 12 flags. The ship mounts more than 30 guns. Each gun fires a shot weighing 3 kwan (11,25kg).

The crew of these ships usually amount to 100 or more persons. Among them are the officers called Captain, Factor, skipper, koopman [merchant], pilot and so forth, who are all upper-class Hollanders. The people under them are called matorosu (NL: matrozen) [sailors], who are very low class. Furthermore, one lot of the lower class people are called swardo jongo (NL: zwarte jongen or blackamoor), not being natives of Holland. Coolies from Djakarta (Batavia), Buginese, Buton, etc. are bought by the Hollanders and used as slaves. As they all come from tropical countries they are very black. Again, every ship has her own name such as Zeedoin (Zeeduin), Sutabenissu (Stavenisse) Hoisu to Sopiki (Huis te Spijk) and so forth.” (The Schellak depicted here, named after the Heerlijkheid [estate] Schellach nearby Middelburg, arrived in Nagasaki in 1741 and 1744. It had a crew of 189-400.)