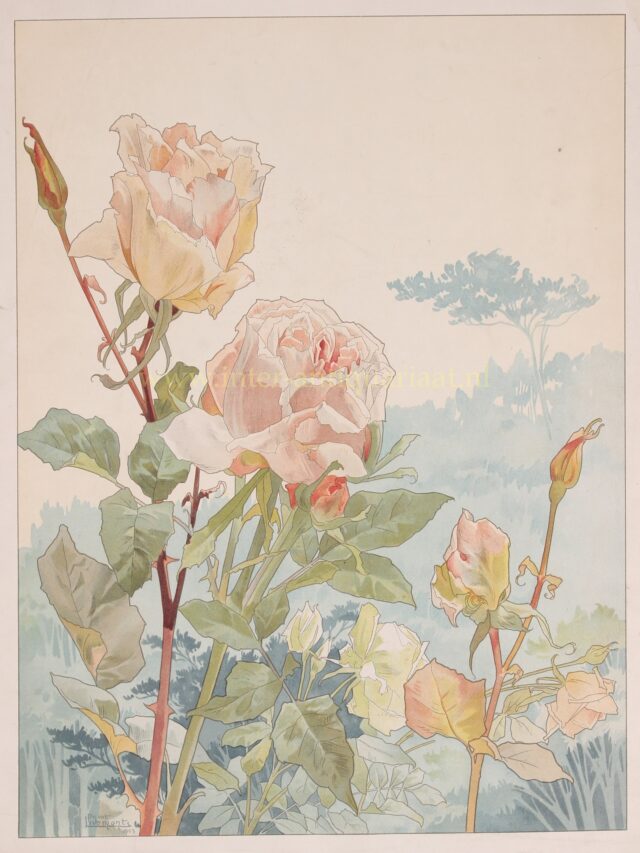 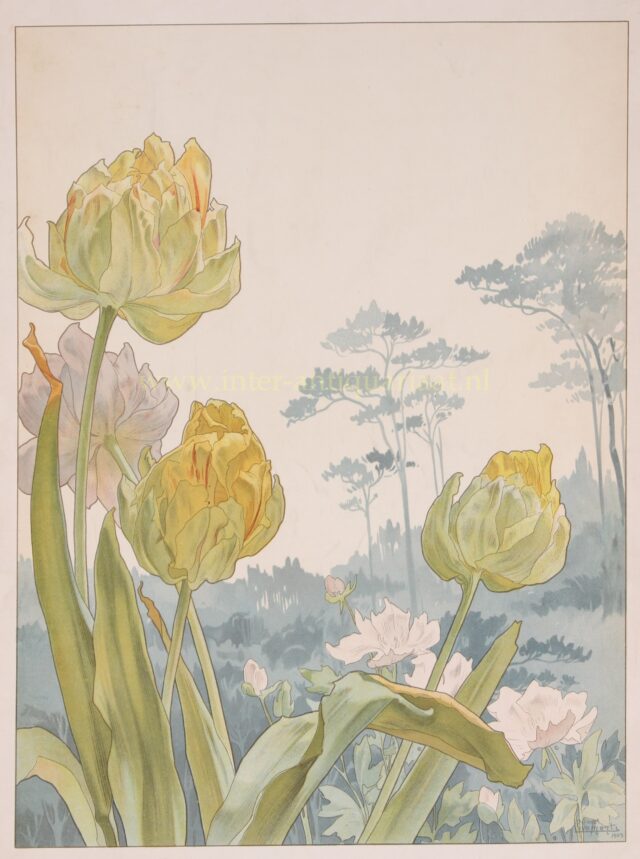 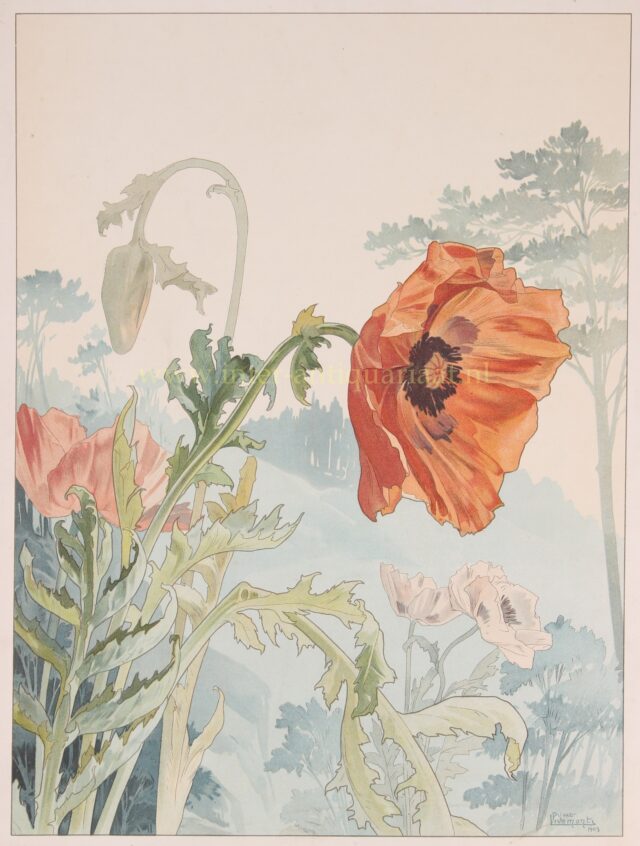 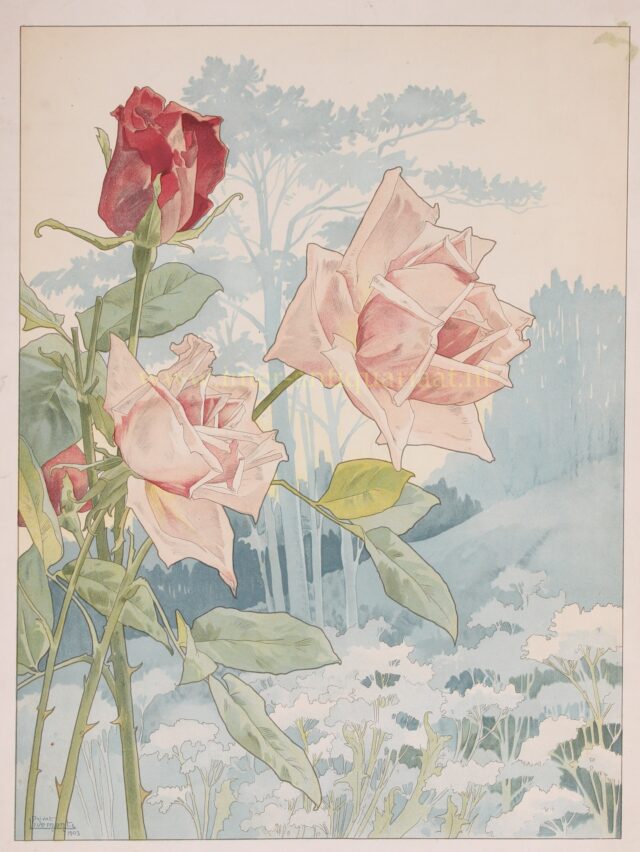 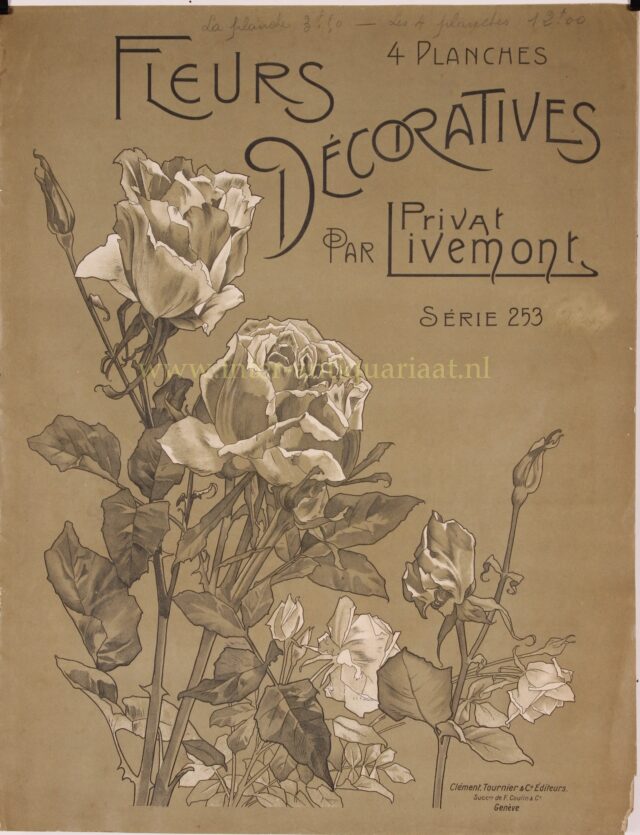 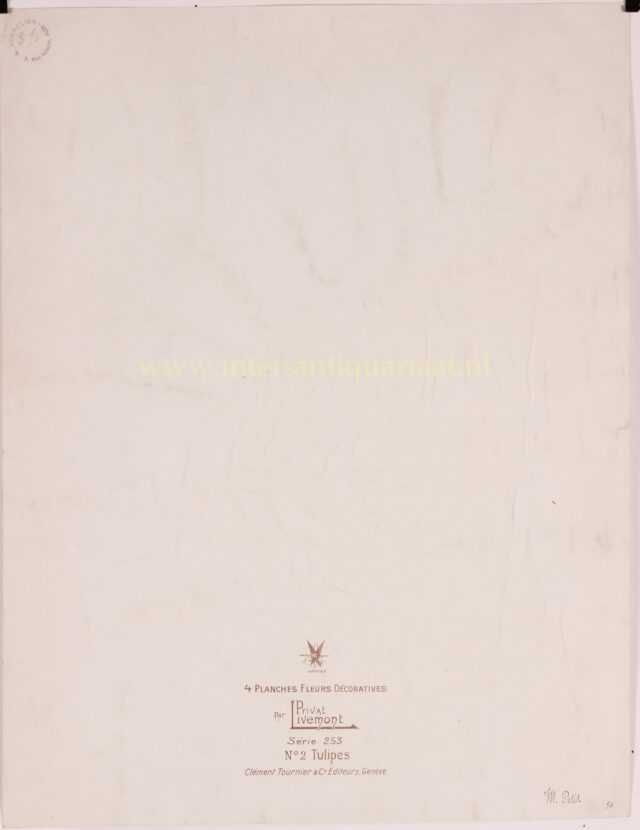 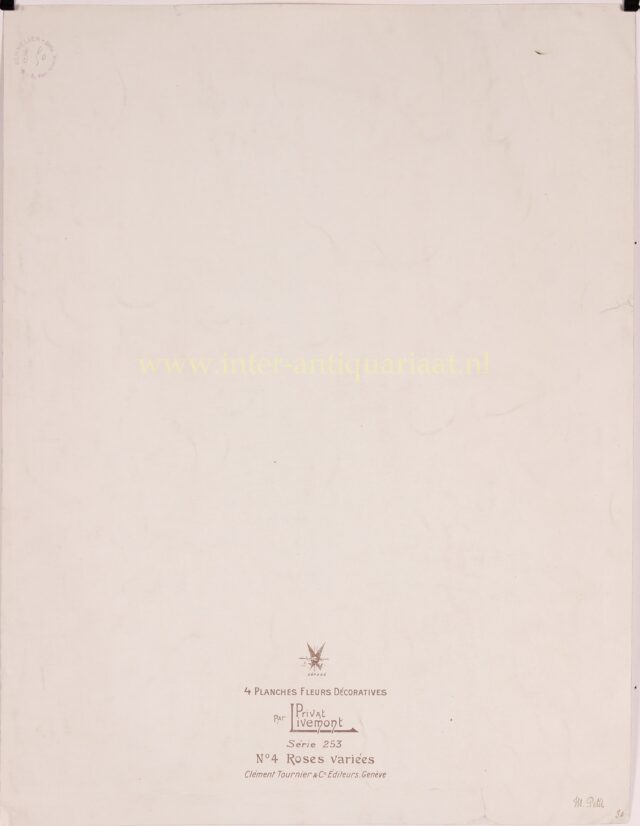 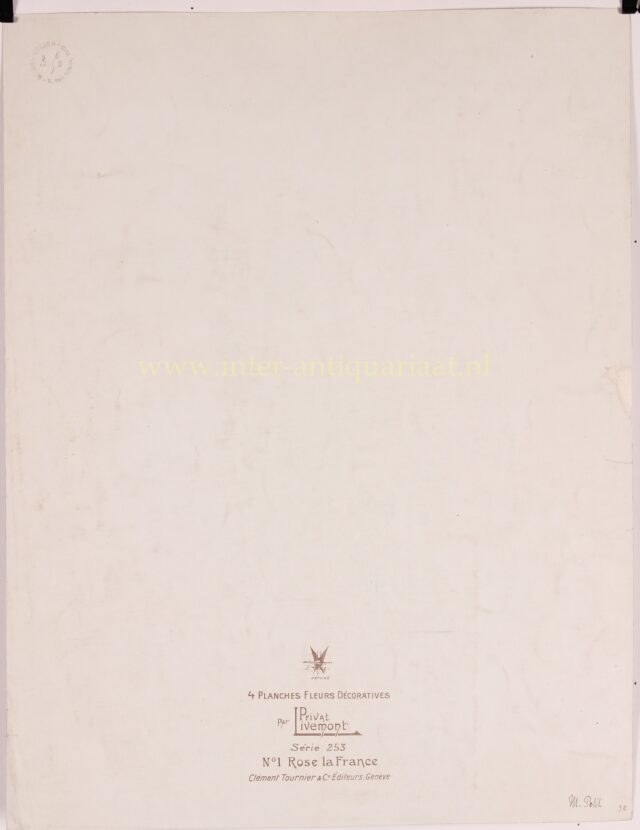 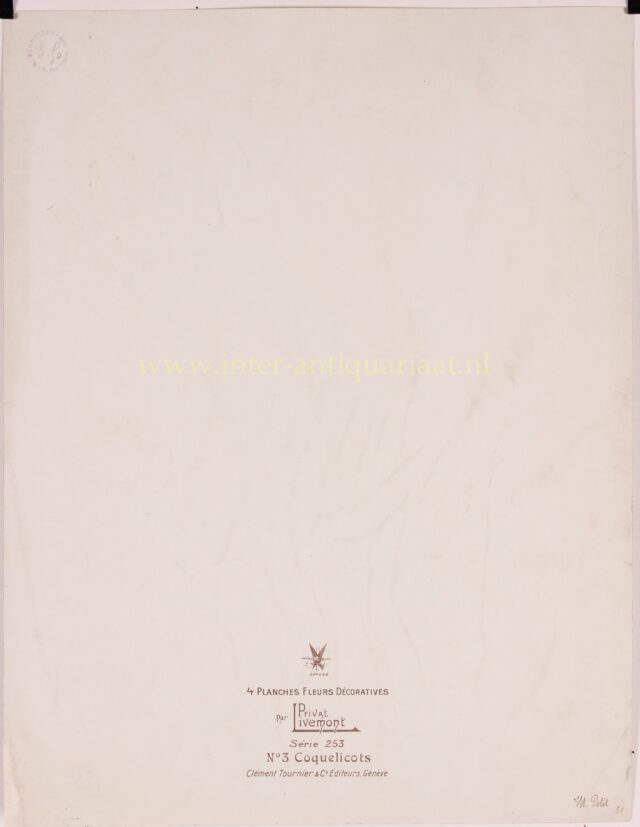 “Quatre Planches Fleurs Décoratives. Série 253: No. 1 Rose La France, No. 2 Tulipes. No. 3 Coquelicots, No. 4 Roses Variées”. Set of 4 color lithographs designed by Henri Privat-Livemont. Published around 1900 by Clément, Tournier & Co. of Geneva. Each 54,5 x 25 cm. In their original wrapper.

‘La France’ is a rose of historic importance. A lovely, classic hybrid tea world famous to rose historians. Reportedly, the legendary first Hybrid Tea Rose, introduced by Guillot & fils in 1867. Its introduction is commonly considered to be the birth of the modern rose. It is exquisitely, deliciously fragrant. Its pungent blossoms exude a strong, sweet blend of damask and musk perfume with a hint of the classic “Old Rose”. The intense fragrance is said to be strong but elusive and reminiscent of a fine and subtle French perfume.

The tulipe originated in the Islamic world probably in the 10th century. First brought to Northwestern Europe in the mid sixteenth century, it was Carolus Clusius who was largely responsible for the spread of tulip bulbs in the final years of the sixteenth century. He planted tulips at the Vienna Imperial Botanical Gardens in 1573. After he was appointed the director of the Leiden University’s newly established Hortus Botanicus, he planted both a teaching garden and his private garden with tulips in late 1593. These tulips at Leiden would eventually lead to both the tulip mania and the tulip industry in the Netherlands.

‘Coquelicots’, wild corn poppies, or Flanders poppies are distinguished by their bright red color, and orange tint. Before the advent of herbicides, the Papaver rhoeas was often abundant in agricultural fields. Flushes of poppies may still appear in fields left fallow. Belle Époque artists like Claude Monet, Robert Vonnoh, and Lucien Pissarro depicted them abundantly.

‘Roses Variées.’ About 50 million years ago, the first rose in the Americas were found in modern-day Colorado. It is believed that roses were grown in many the early civilisations of temperate latitudes from at least 5000 years ago. They are known to have been grown in ancient Babylon. Paintings of roses have been discovered in Egyptian pyramid tombs from the 14th century BC. Records exist of them being grown in Chinese gardens and Greek gardens from at least 500 BC. The significant breeding of modern times started slowly in Europe, from about the 17th century. This was encouraged by the introduction of new species, and especially by the introduction of the China rose into Europe in the 19th century. A major contributor in the early 19th century was Empress Josephine of France who patronized the development of rose breeding at her gardens at Malmaison.

Henri Privat-Livemont (1861–1936) was an Art Nouveau artist originally from Schaerbeek, Brussels (Belgium). From 1883 to 1889, he worked and studied in the studios of Lemaire, Lavastre & Duvignaud. He, with Lemaire, created the decor of the Theatre Français as well as the Hôtel de Ville, Paris. He later moved back to Brussels, and worked on theaters and casinos there.