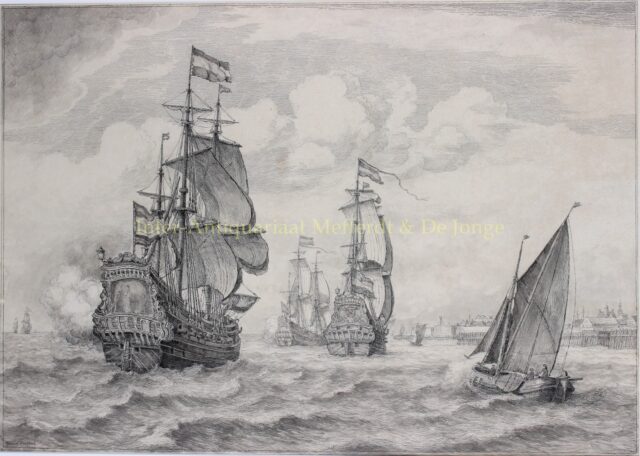 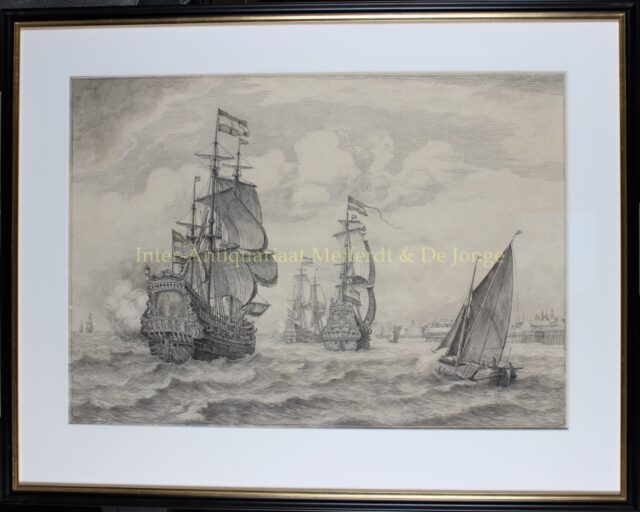 HISTORICISING VIEW OF THE IJ AT AMSTERDAM

Ships on the IJ at the port of Amsterdam, drawing in pen made by Gerardus Johannes (“Gerard“) Koekkoek around 1900. Signed in the lower left corner. Size. 50 x 72 cm.

The Amsterdam port was the largest in Europe in the 17th century. Merchant ships sailed from the Zuiderzee onto the IJ, offloaded the cargo they brought from overseas and recruited their crews. The IJ and its port were the reasons of existence of the city.

This historicising view shows the IJ with its familiar row of poles as boundary of the city. There are three East-India men with cannons, one of which is the Witte Oliphant [White Elephant], built in 1639 for the East-India Company’s chamber of Amsterdam for which it sailed back and forth to Batavia [nowadays Djakarta] until 1665.

Gerard Koekkoek (1871 – 1956) was a member of the well known Koekkoek family of artists. Gerard Koekkoek painted and made drawings, but he was also a graphic artist and had a reputation for restoring paintings. His work is impressionistic and his themes focus on landscapes in which water (rivers, canals and ports) play a major role, of which this drawing is a fine example.