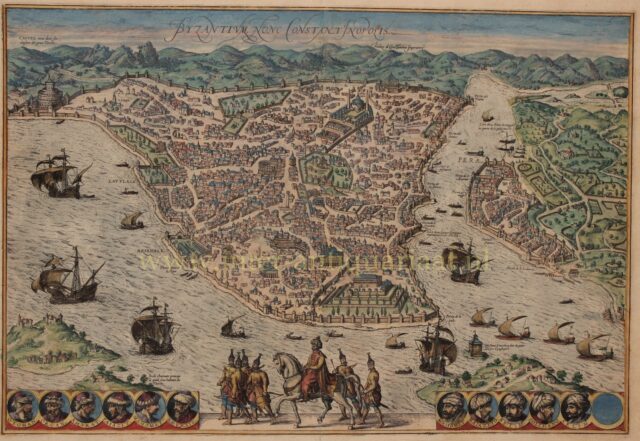 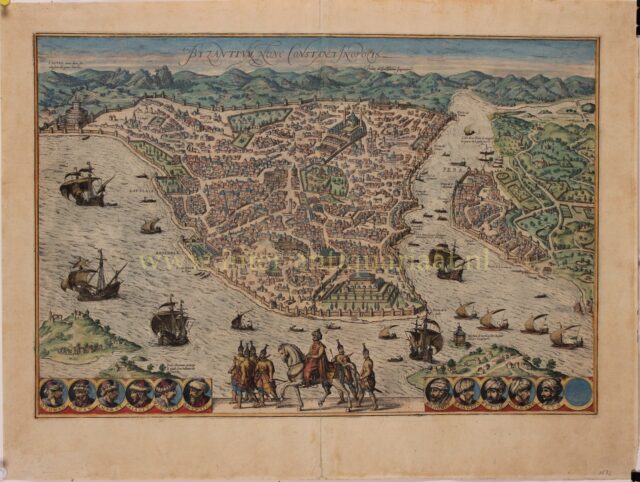 ISTANBUL DURING ITS GOLDEN ERA

This is a truly wonderful example of the highly sought after 1st state, bird’s eye view of Constantinople from Braun and Hogenberg’s monumental town book, the “Civitates Orbis Terrarum”, the most prolific compilation of city views published in the 16th Century.

The city is seen from the village of Scutari (Üsküdar) on the Asian side, with its originally Genoese district of Galata (‘Pera’ on the map) on the opposite bank of the Golden Horn to the right. European galleons and Turkish galleys fill the waters of the Bosporus and Golden Horn. The great buildings of the 16th Century Istanbul during the reign of Suleiman the Magnificent can be clearly seen, including the Eski Saray (old palace), Hippodrome, Hagia Sophia, Hagia Irene, Süleymaniye Mosque and the Topkapi Palace.

The city’s remarkable shape resembles the horn of a rhino, and it possesses extraordinary natural and manmade defenses. The great Theodosian walls, initially built in the 5th century (and on which one may walk to this day!), stretch from the Golden Horn to the Sea of Marmara. These walls were amongst the most formidable of all defensive walls in the medieval world.

In the front the revered and feared Suleiman the Magnificent is escorted by a group of his Janissaries, the elite infantry units that formed the Ottoman Sultan’s household troops and bodyguards.

Suleiman the Magnificent ruled from 1520-1560 and was regarded as the most significant ruler in the world, by both Muslims and Europeans. His military empire expanded greatly both to the east and west, and he threatened to overrun the heart of Europe itself. In Constantinople, he embarked on vast cultural and architectural projects. Istanbul in the middle of the sixteenth century was architecturally the most energetic and innovative city in the world. While he was a brilliant military strategist and canny politician, he was also a cultivator of the arts. Suleiman’s poetry is among the best poetry in Islam, and he sponsored an army of artists, religious thinkers, and philosophers that outshone the most educated courts of Europe.

Suleiman became a prominent monarch of 16th century Europe, presiding over the apex of the Ottoman Empire’s military, political and economic power and is rembered for his complete reconstruction of the Ottoman legal system. Suleiman personally led Ottoman armies to conquer the Christian strongholds of Belgrade, Rhodes, and most of Hungary before his conquests were checked at the Siege of Vienna in 1529. He annexed most of the Middle East in his conflict with the Safavids and large swathes of North Africa as far west as Algeria. Under his rule, the Ottoman fleet dominated the seas from the Mediterranean to the Red Sea and the Persian Gulf.

Not only was Suleiman a distinguished poet and goldsmith in his own right; he also became a great patron of culture, overseeing the golden age of the Ottoman Empire’s artistic, literary and architectural development. He spoke five languages: Ottoman Turkish, Arabic, Chagatai (a dialect of Turkic languages and related to Uyghur), Persian and Serbian.