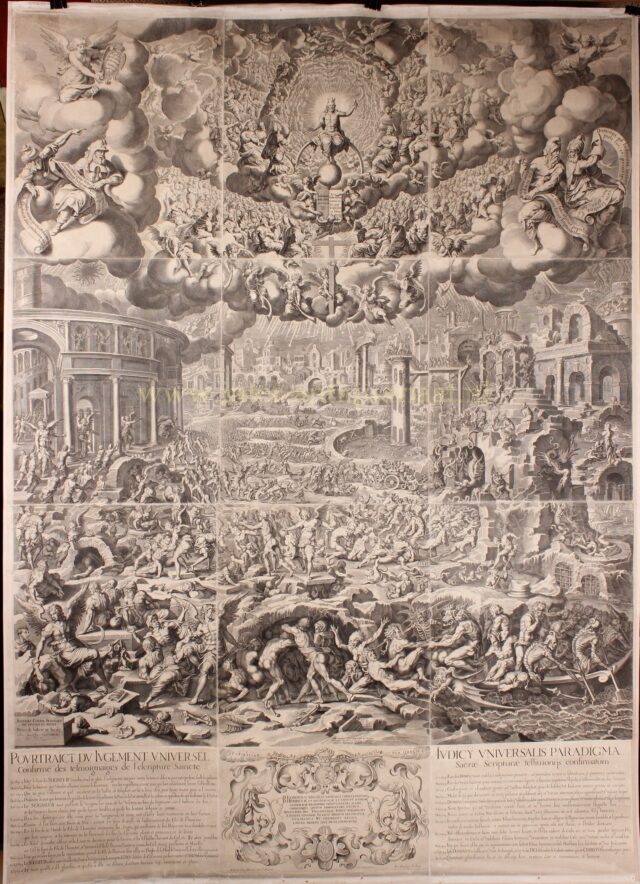 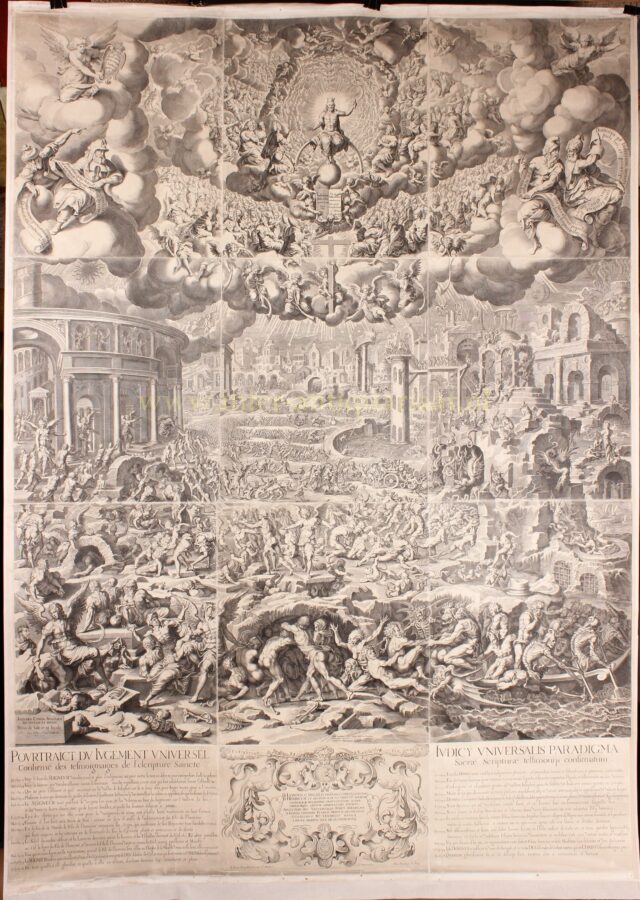 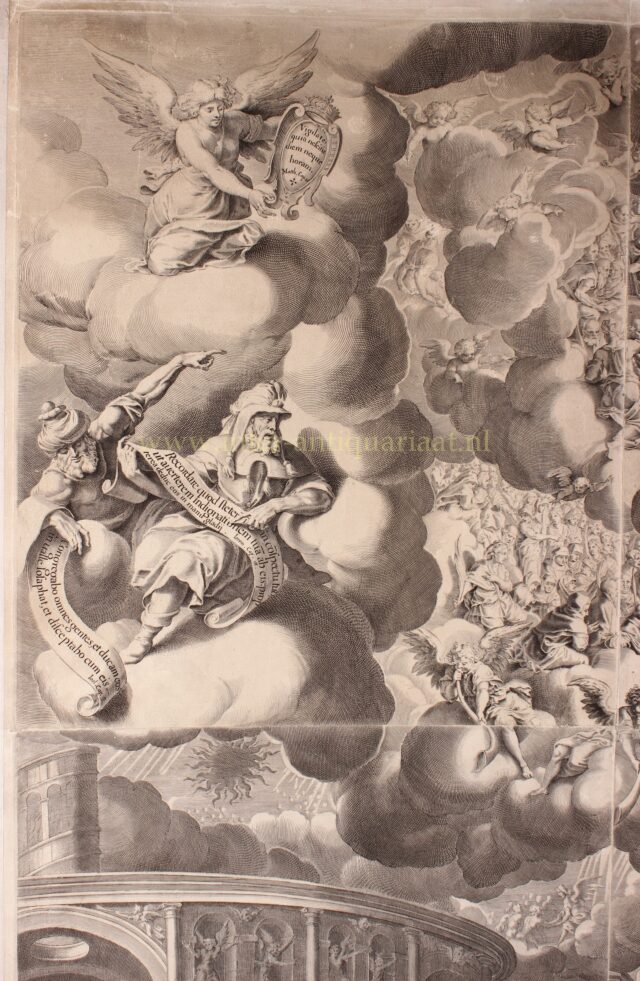 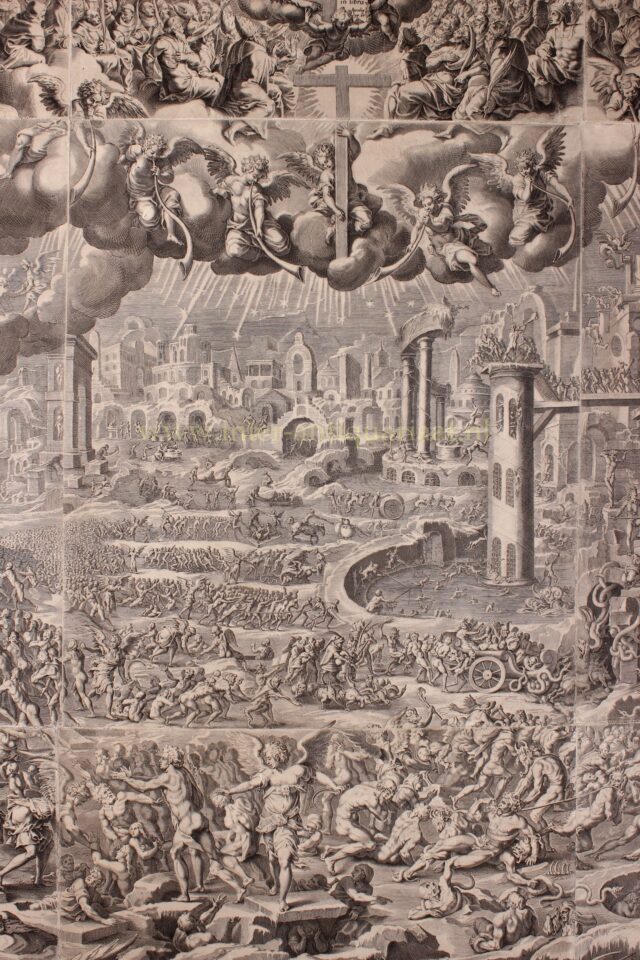 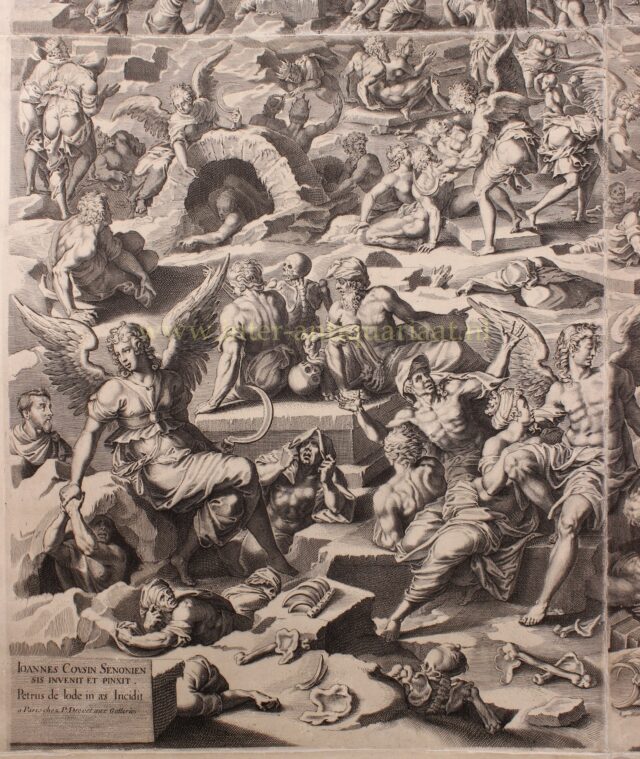 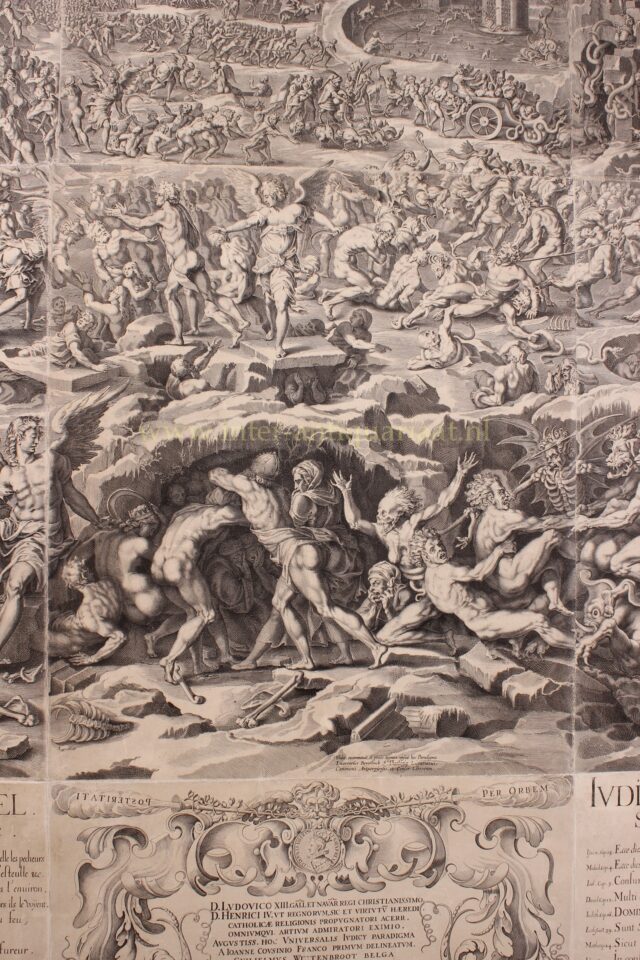 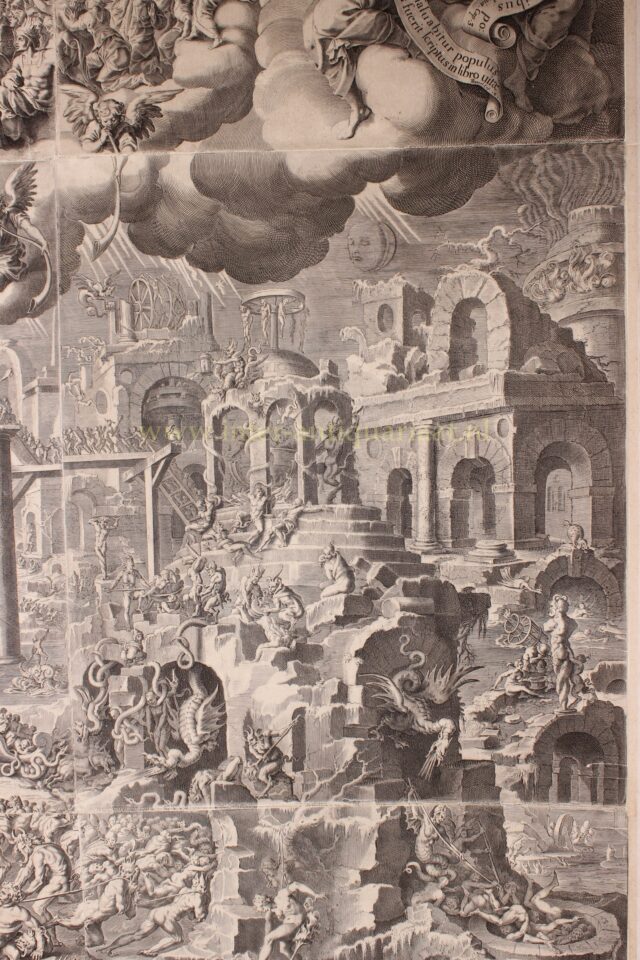 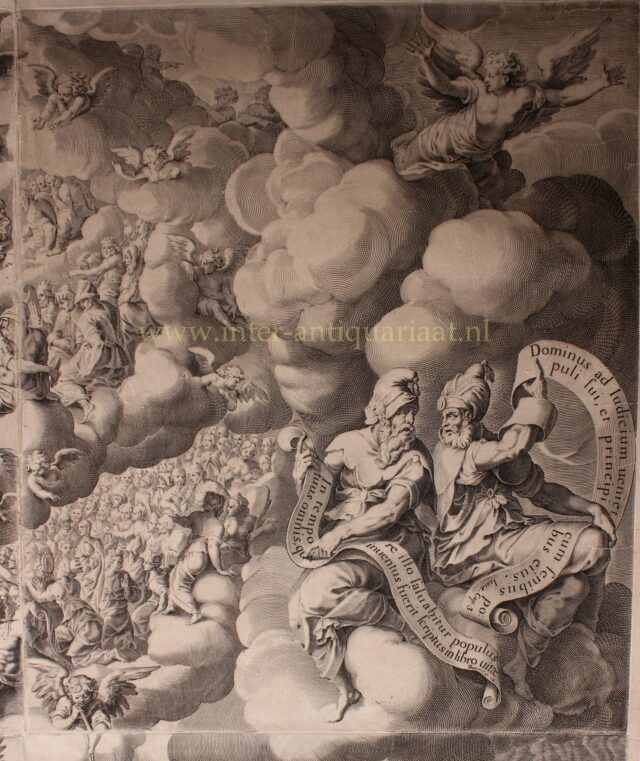 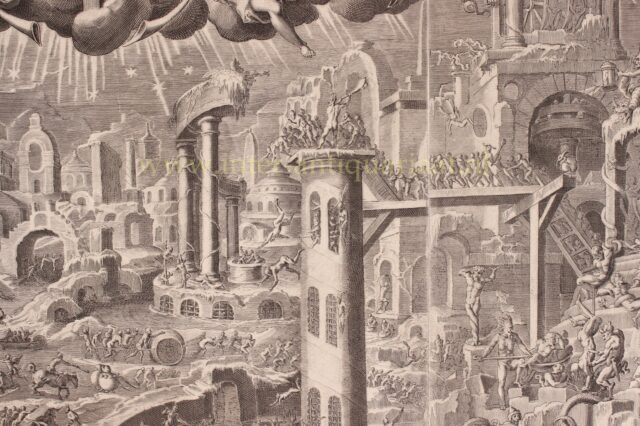 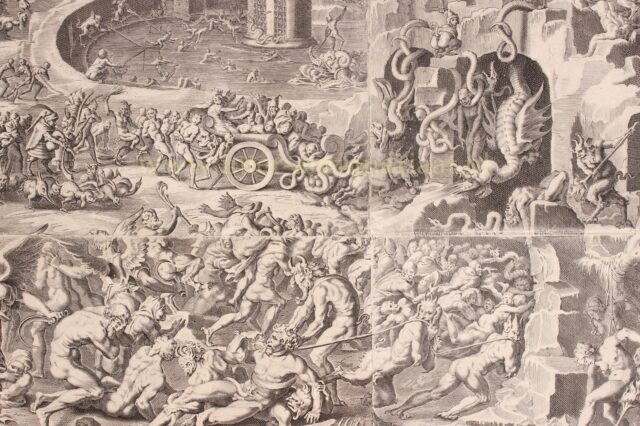 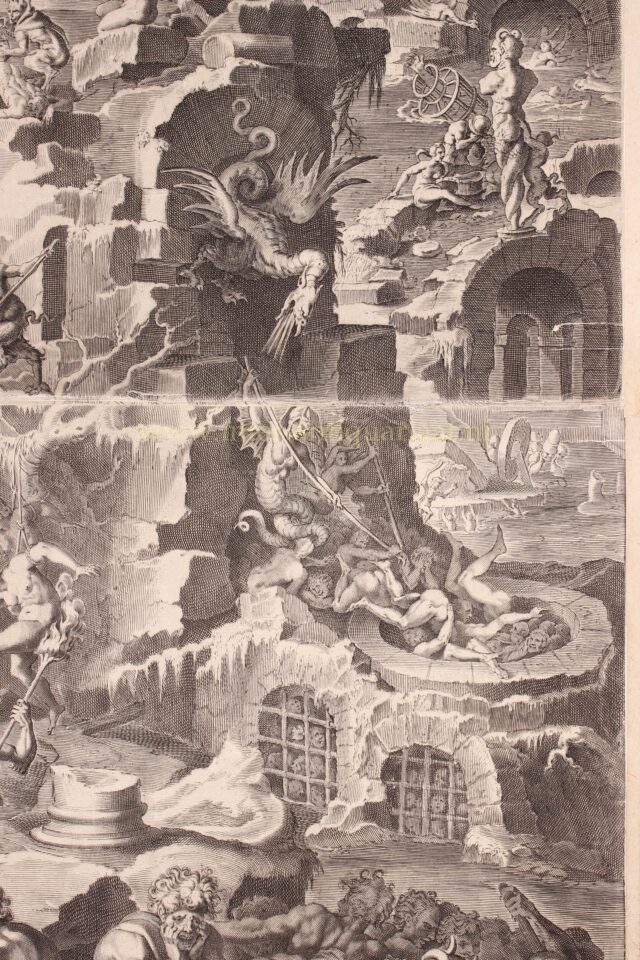 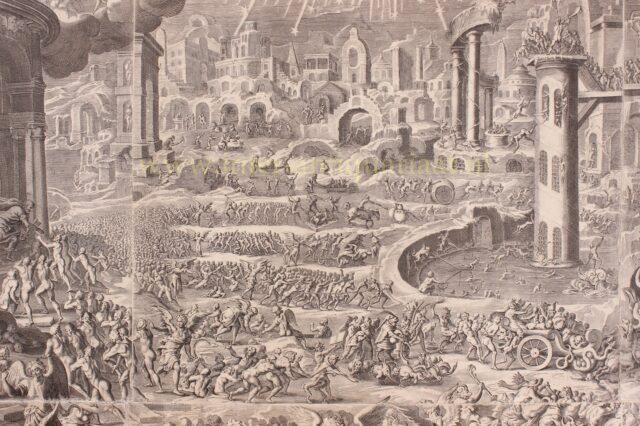 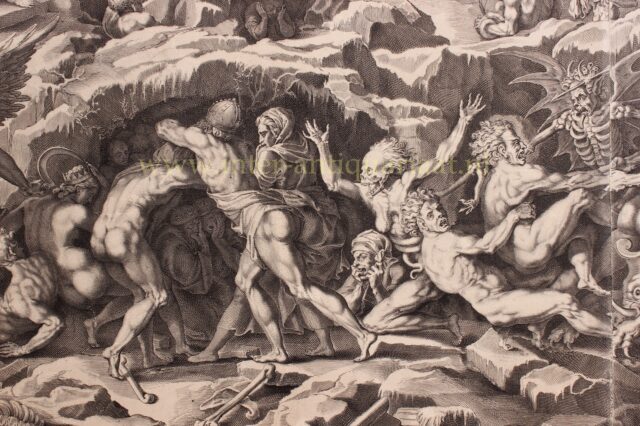 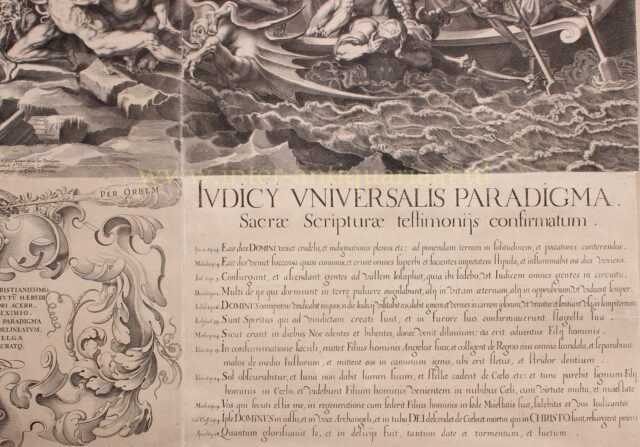 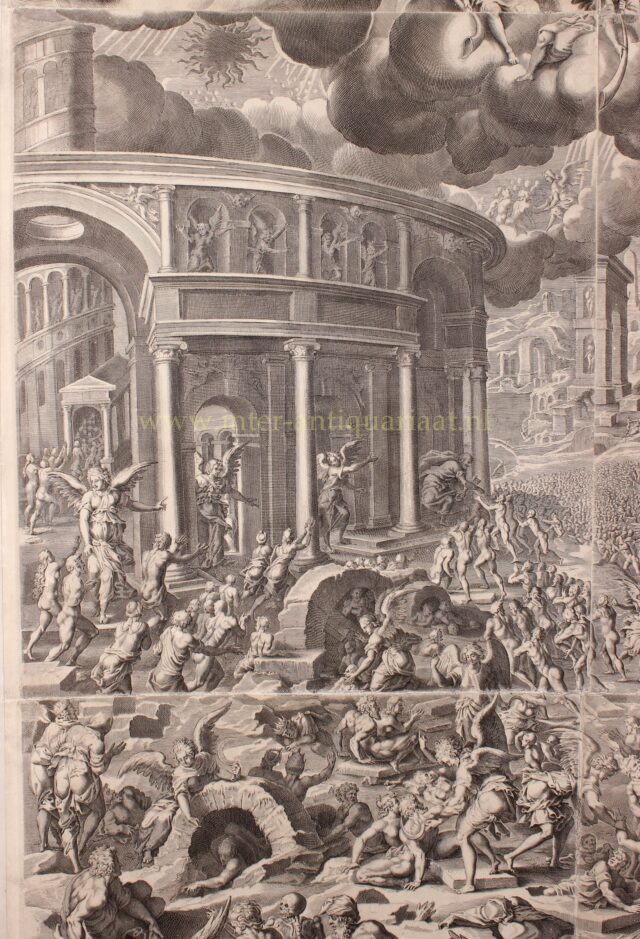 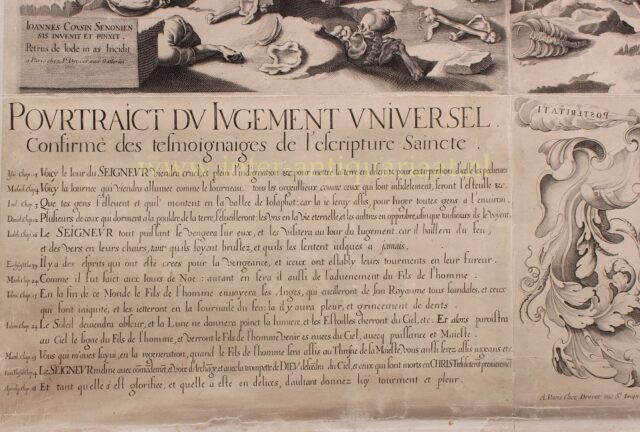 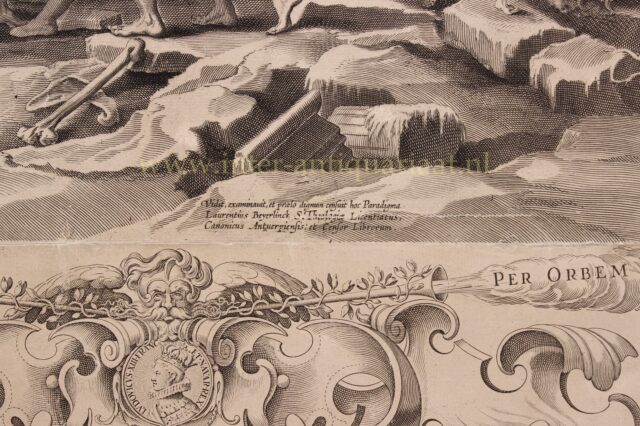 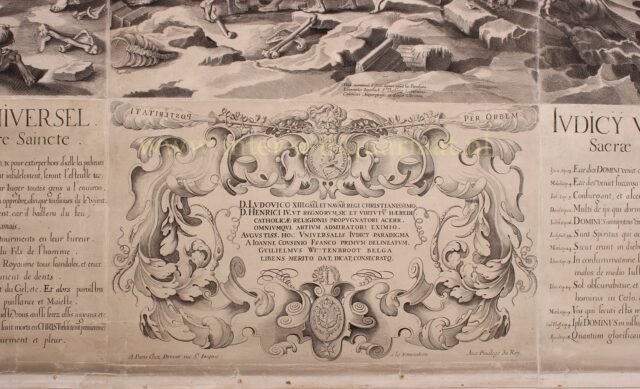 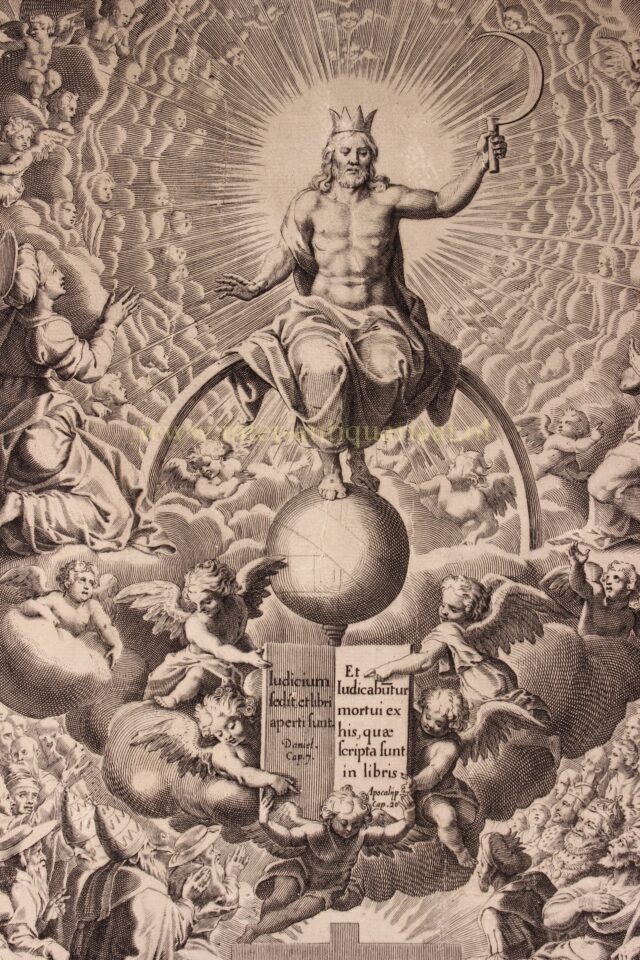 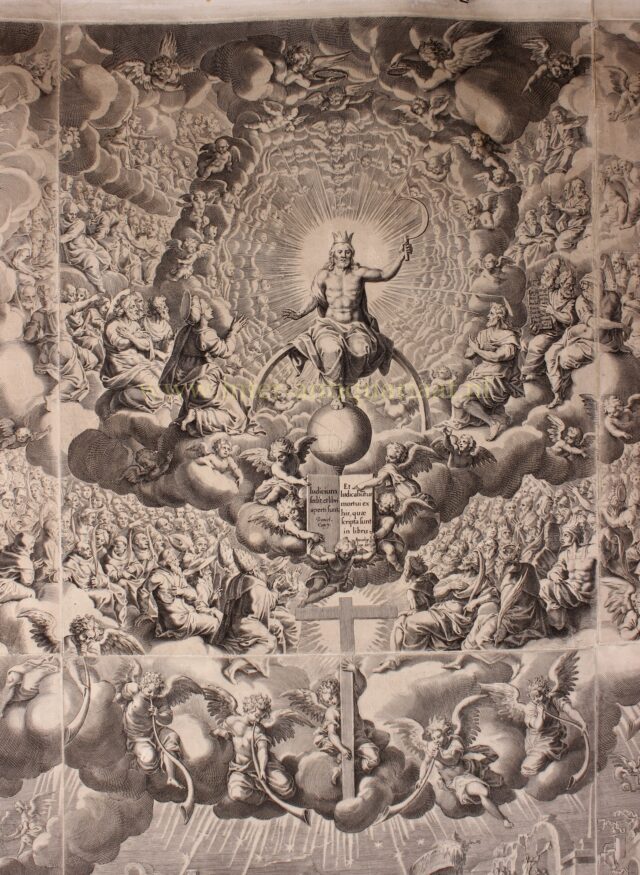 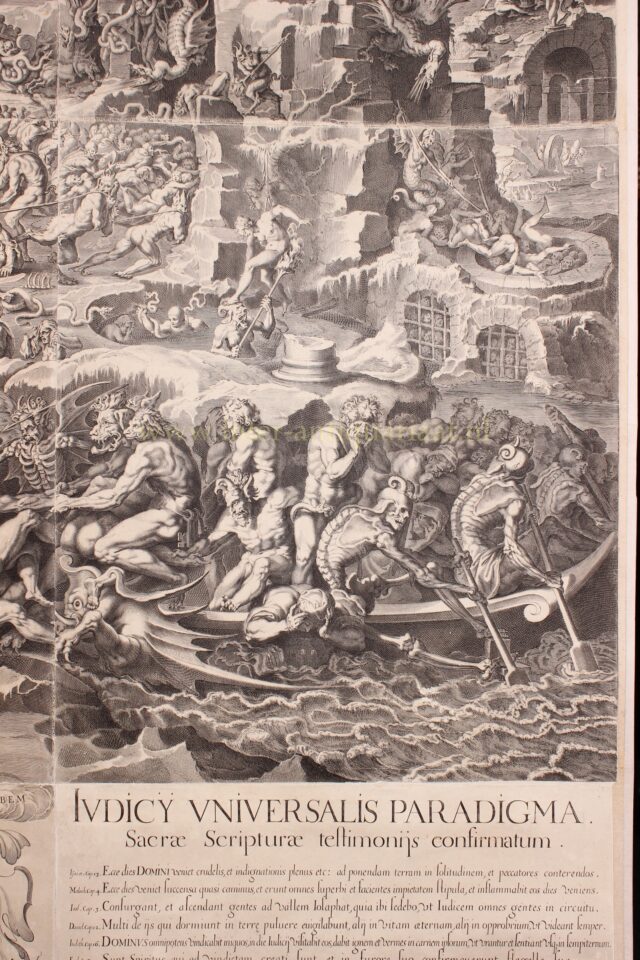 “Pourtraict du Iugement Universel – Iudici Universalis Paradigma” copper engraving on twelve plates made by Pieter de Jode the Elder (1570-1634) after the painting by Jean Cousin the Younger (ca. 1522-1595), here printed in a second state by Pierre Drevet in Paris at the end of the 17th century. Size: 169 x 126.5 cm. Mounted on linen between wooden sticks.

The Bible in several places mentions the end of times, doomsday, the Apocalypse, in which the living and the dead will be judged. During this day of judgment, Christ returns to the earth to judge about who will go to heaven and who will go to hell.

At the top in the middle we see Jesus Christ sits in glory, earth at his feet. With his left hand he raises a sickle threatening the unfortunates below him, they are those who will go to hell. Among the damned are also figures of high rank wearing crowns. With his right hand he gestures in blessing to the saved, they will be taken into the heavenly paradise. Christ is flanked by the Virgin Mary and John the Apostle, pleading for the damned. The other apostles sit around them.

The angels blow trumpets to raise the dead for judgment. Demons and monsters rule earth, representing the sin of man. Now the good is separated from the bad.

In the centre the dead rise from their graves. Those who are worthy are brought to the gates of Heaven, represented here by a castle with large walls built to keep out sinful impurities.shown on the left hand side. Groups of angels adorn the walls of Heaven celebrating the saved as they approach Heaven’s gates, where Saint Peter waits with his keys.

The damned go to hell, which is everywhere. Skeletons row the dead into outer darkness. Others are thrown from a tower, dumped into a dungeon, strangled by snakes, broken on the wheel or simply hanged.

The viewer is held up to a mirror. In the moment when the apocalypse wipes out the world and all will end, you may ask how you have lived your life. Will you be worthy to go to heaven, or be damned in hell? It reminds the viewer that Judgment Day will come and that it is therefore wise to live well. Or else…

Below the depiction of the story a disclaimer in small print: this paradigm, this explanation of the last judgment, has been viewed, assessed and deemed worthy to be printed, by Laurentius Beyerlinck, licentiate in theology, canon in Antwerp and censor of books. So the Catholic Church says it’s all true…