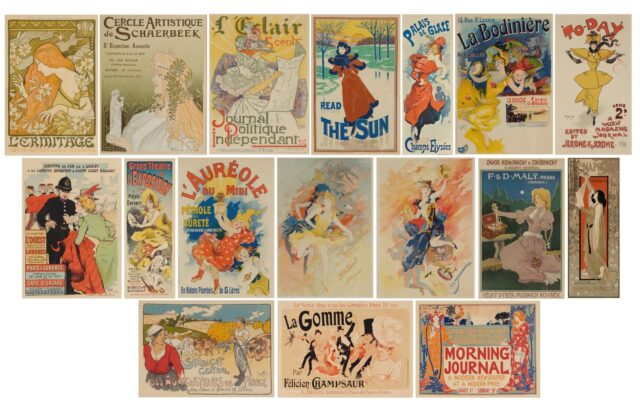 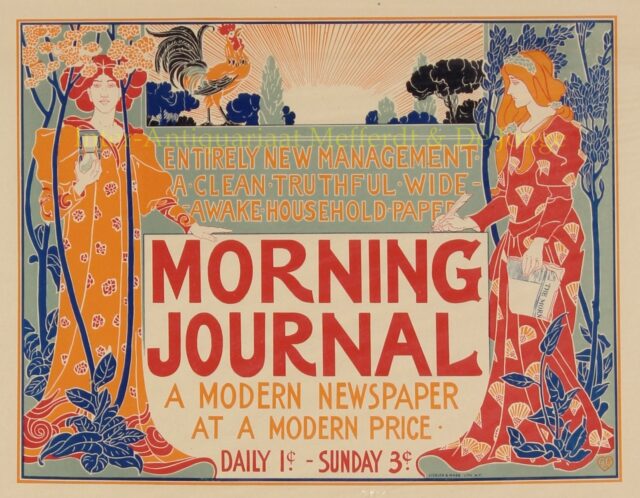 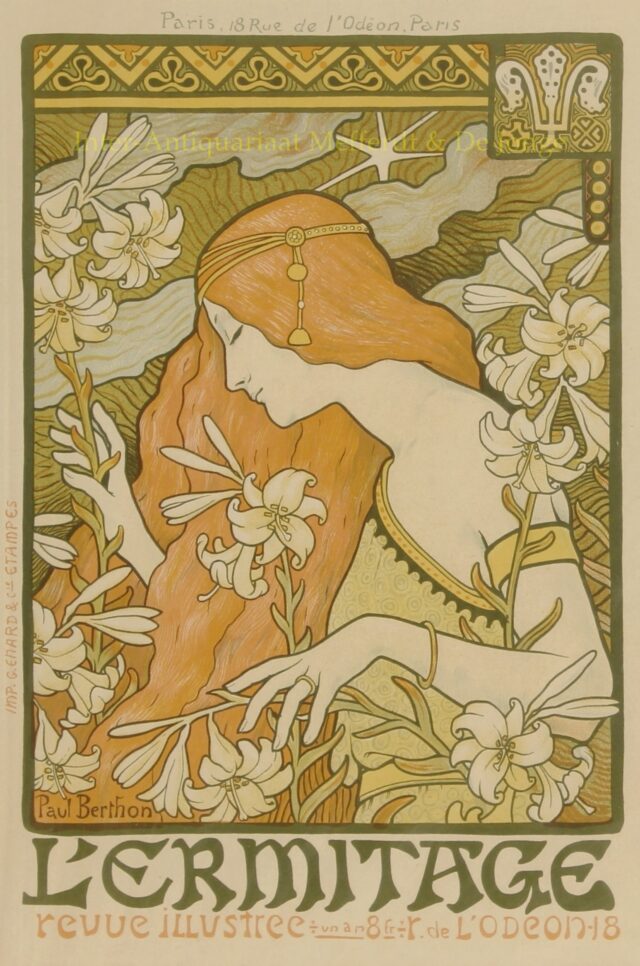 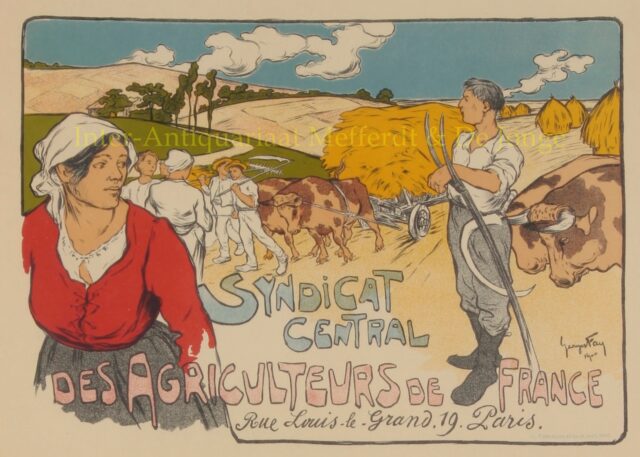 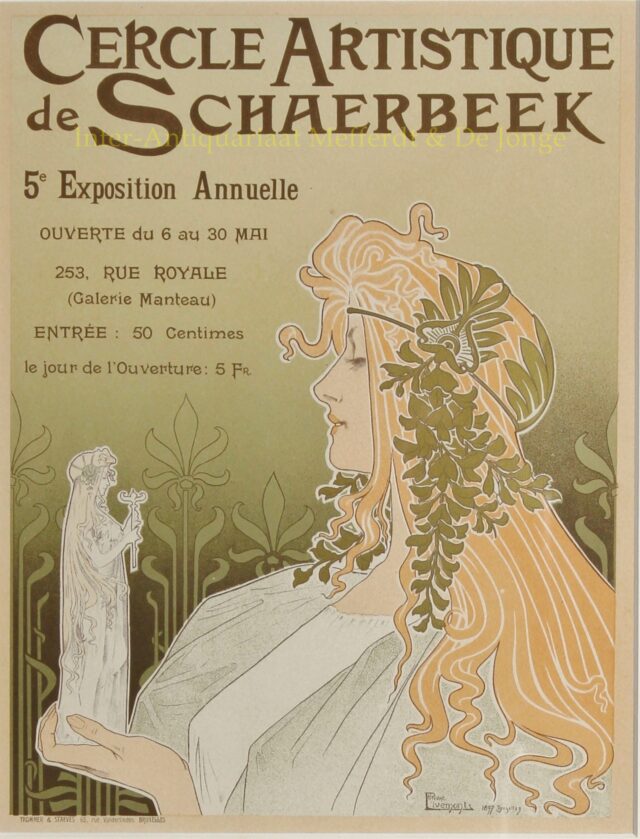 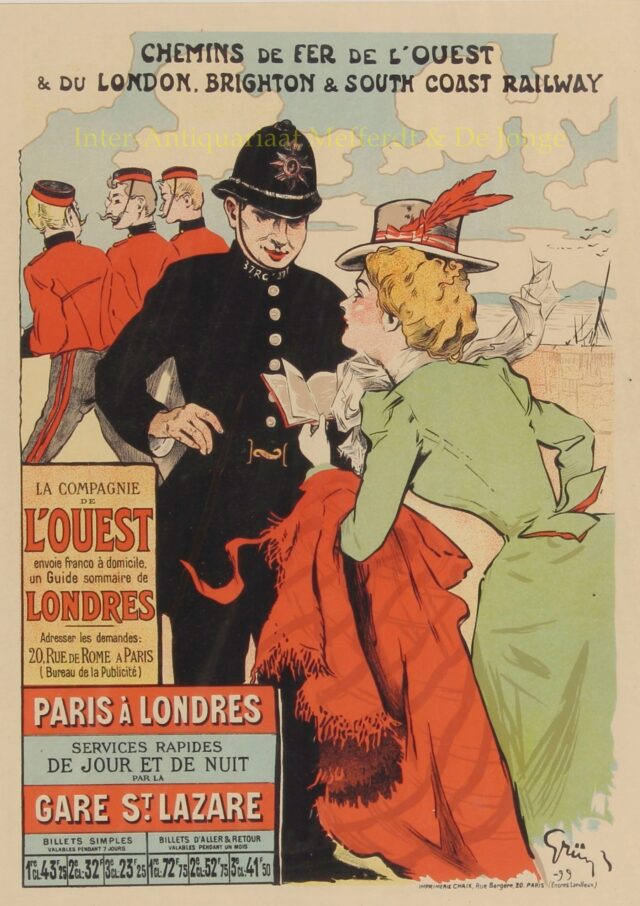 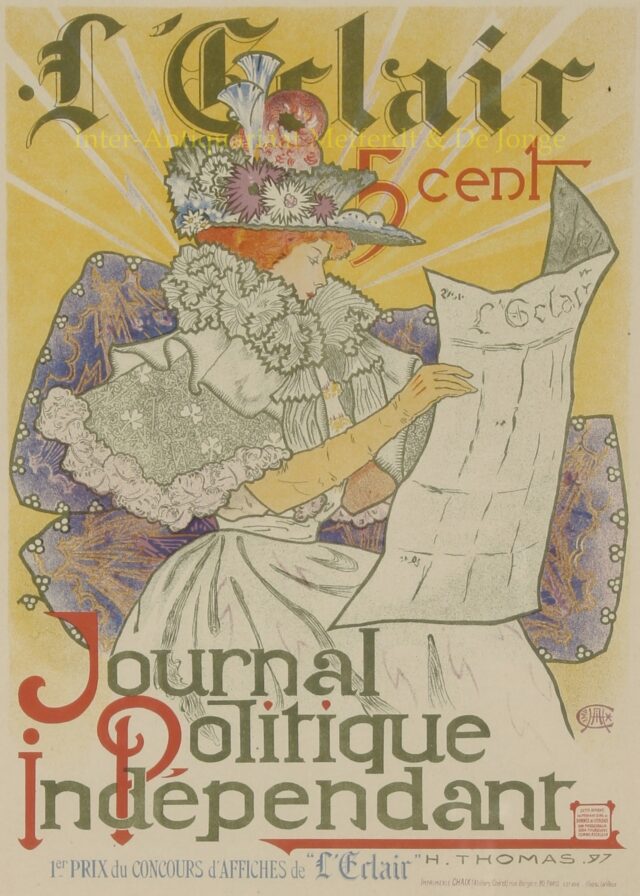 COLOURFUL PICTURE OF THE BELLE ÉPOQUE

The Maitres de l’Affiche series was the direct result of international interest in posters and poster artists that reached its height in the mid-1890s in Europe and America. The masterpieces of artists like Jules Chéret, Henri de Toulouse-Lautrec, and Alphonse Mucha transformed commercial advertisements into an esteemed art form worthy of public adoration and scholarly pursuit. Along with the decade’s wave of poster journals, books, and exhibitions came a serious desire to collect the artworks for personal enjoyment and study — but the sheer size of posters made storage awkward and often times impossible.

The Maitres de l’Affiche (“Masters of the Poster”) series was born of this dilemma. By offering subscribers reductions of the era’s most important posters, collectors and enthusiasts were able to build miniature archives of posters from around the world. The complete Maitres de l’Affiche series boasted 256 expertly produced miniature lithographic plates representing the best of the Belle Époque. During its five-year run from late 1895 to 1900 the series was hugely successful, and it continues to be popular today, offering experts and novices alike a convenient and dazzling overview of some of the finest achievements in poster art.

It is not surprising that the exquisite Maitres de l’Affiche collection was the brainchild of Jules Chéret, inventor of the three-stone lithographic process and virtual founder of the modern poster.  As early as the 1860s, Chéret’s magnificent creations brought elegance and colour to the urban landscape of Paris and soon generated an international industry.  By 1866, Chéret opened his own print shop, which would eventually become a branch of the large French publisher Imprimerie Chaix.  His role as artistic director at Chaix provided Chéret with the platform and resources necessary to launch the Maitres series.

The first four plates were released in December of 1895 and featured posters by Chéret, Toulouse-Lautrec, Julius Price, and Dudley Hardy.  The series would continue for a total of sixty months, ending in November of 1900 — truly spanning the peak of the poster craze.  In the end, there were a total of 240 regular plates and 16 bonus plates.

The Maitres de l’Affiche series operated much like a contemporary magazine.  A poster enthusiast had the option of purchasing the current month’s four plates from a specialized dealer, or he could choose to subscribe to the series for the length of one year.  In France, a one-year subscription cost 27,- francs, equivalent to roughly five to ten original full-sized versions of the posters highlighted in the Maitres series.

The first plate of every month was a poster by Chéret himself, making him the most frequently represented artist in the series.  As a matter of fact, Chéret’s 60 regular and seven bonus plates comprise nearly 25-percent of the entire collection.  All in all, 97 artists from around the world were represented in the Maitres de l’Affiche series, though more than half of them were French.  In contrast, only four were from Italy, six from Germany and eight from England. A range of popular styles are evident in the collection, including the classic Art Nouveau of Alphonse Mucha and Privat Livemont, the illustrations of Edward Penfield and Adolphe Willette, and the graphic qualities of Toulouse-Lautrec and Pierre Bonnard.

The original, full-sized posters and the Maitres prints they inspired were never considered in competition with one another; rather, they were viewed as two entirely different entities.  While posters were large and bold, prints were beloved for their exquisite size and detail.  In addition, posters were often printed on inexpensive newsprint due to their anticipated short lifespan.

Prints, on the other hand, were made on very fine paper using printing techniques too intricate for larger items.  Print collecting was an extremely popular hobby in its own right well before posters became fashionable.  Chéret introduced the modern poster, but it was not until Toulouse-Lautrec’s Moulin Rouge in 1891 that posters were elevated to an art form print collectors deemed worthy of their attention.  In many ways, the Maitres series can be seen as the successful marriage of the poster and print crazes.

In his preface to Volume I of the Maitres series, Roger Marx, a notable 19th-century art historian and critic, described the streets of Paris as ‘a museum in the breeze.’ He wrote that ‘the poster has a precarious fate… it gleams in sun, fades in the mist, dangles sadly in shreds, [and] sways in the wind after a heavy shower.’  Although innately ephemeral in its purpose, the poster was saved by its beauty and charm.  Les Maitres de l’Affiche, in its convenient format, has certainly stood the test of time.