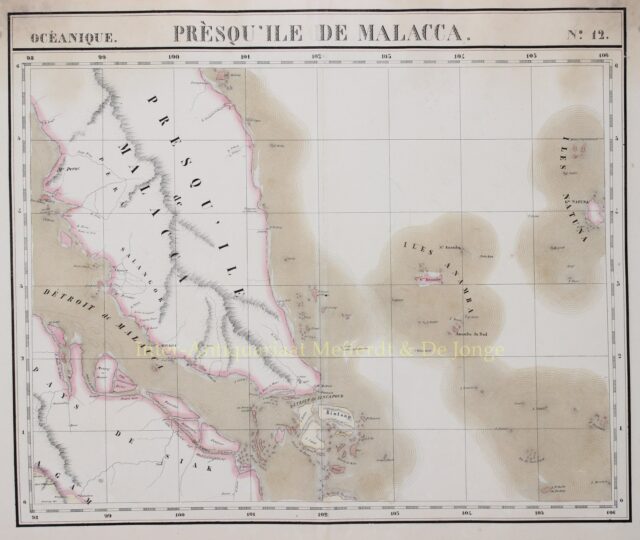 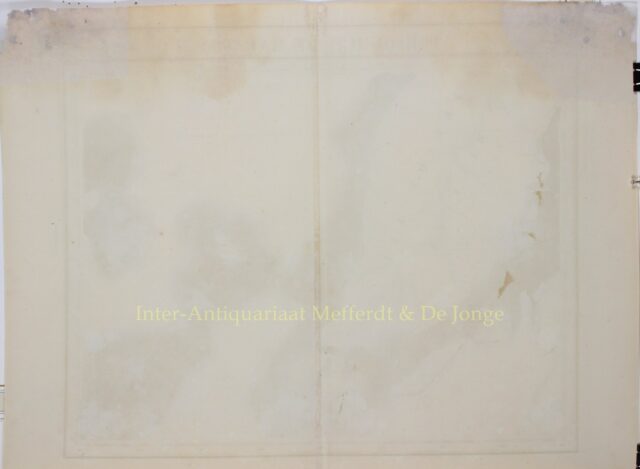 MAP OF THE MALACCA PENINSULA WITH SINGAPORE

Vandermaelen’s Atlas Universel containing 378 maps issued in six volumes, is considered the first atlas ever published with all maps drawn to the same scale and the first to be produced by lithography.

In 1818, Sir Thomas Stamford Raffles was appointed Lieutenant Governor of the British colony at Bencoolen. Raffles believed that the British should find a way to challenge the dominance of the Dutch in the area. The trade route between China and British India passed through the Malacca Strait, and with the growing trade with China, that route would become increasingly important. However, the Dutch had tight control over the trade in the region and intended to enforce the exclusive rights of its company ships to trade, and that trade should be conducted at its entrepot Batavia. British trading ships were heavily taxed at Dutch ports, stifling British trade in the region.

Raffles reasoned that the way to challenge the Dutch was to establish a new port in the region. Existing British ports were not in a strategic enough position to becoming major trading centres. Penang was too far north of the southern narrow part of Straits of Malacca controlled by the Dutch, whereas Bencoolen faced the Indian Ocean near the Sunda Strait, a much less important area as it is too far away from the main trading route. Many other possible sites were either controlled by the Dutch, or had other problems.

In 1818, Raffles managed to convince his superior in the British East India Company, to fund an expedition to establish a new British base in the region, but with the provision that it should not antagonise the Dutch. Raffles then searched for several weeks. He found several islands that seemed promising, but were either already occupied by the Dutch, or lacked a suitable harbour.

Eventually Raffles settled on the island of Singapore, because of its position at the southern tip of the Malay peninsula, near the Straits of Malacca, and possessed an excellent natural harbour, fresh water supplies, and timber for repairing ships. Most importantly, it was unoccupied by the Dutch.

Raffles’ expedition arrived in Singapore on 29 January 1819. He found a Malay settlement at the mouth of the Singapore River, headed by a Temenggong (governor) for the Sultan of Johor.

In 1824, the entire island of Singapore became a British possession after a treaty with the Sultan. In 1826, Singapore became part of the Straits Settlements, under the jurisdiction of British India, becoming the regional capital in 1836. Prior to Stamford Raffles’ arrival in 1819, there were only about a thousand people living on the island, mostly indigenous Malays along with a handful of Chinese. By 1825, the population had passed the ten thousand mark.