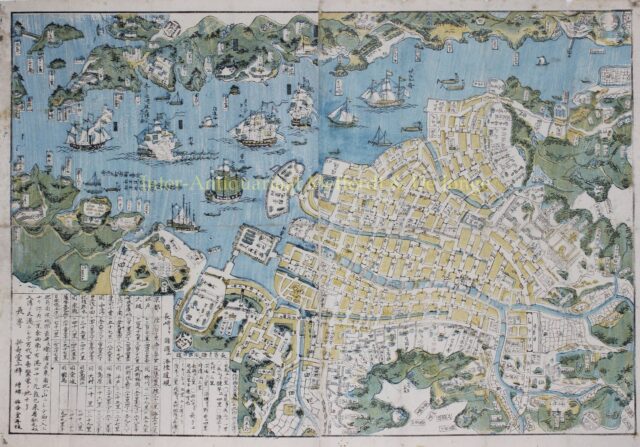 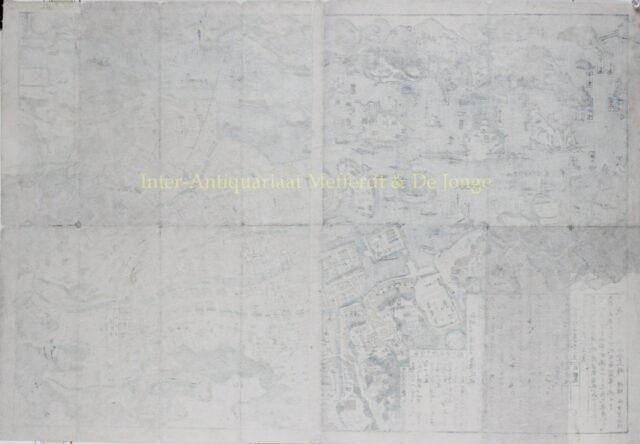 NAGASAKI HARBOUR WITH THE DUTCH FACTORY OF DEJIMA

The map is oriented diagonally, with straight North pointing to the upper right corner of the map. This allows an aesthetically pleasing depiction of the ships horizontally entering and exiting the port. The orientation places the Dutch factory Dejima (築島), a fan-shaped island, in the centre of the map as its subject. Next to the Dutch factory, the map shows also the Chinese factory. At the bottom left there is a chart describing the distances from Nagasaki to various city centres. These calculations include the distances travelled by land and by sea. It states for instance, that the distance from Nagasaki to Osaka is 197 ri (Japanese miles) by land, and 235 ri by sea.

After the expulsion of the Portuguese from Japan,  only Chinese and Dutch ships were allowed to come to Japan, and Nagasaki was the only harbour they were allowed to enter. Dejima became the factory ground for the Dutch East India Company (V.O.C.) in 1641. Dejima was Japan’s sole contact with Europe until the late 1850s.

The island on the map is not illustrated in great detail, but one can identify a Dutch flag and fence surrounding the perimeters of the island, and the single bridge that connects the trading post to the mainland. At this point in time, the island was made up of warehouses, and some residential housing. Life on Dejima was monotonous. The Dutch residence had to abide by strict rules, and special permission was required to leave the island.

This map is a re-issue of a somewhat larger map published in 1821. Japan had started to open up in the 1850s and more international traders settled in Nagasaki.

This is so-called Nagasaki-e print, a type of print that is depicting particular characteristics of Nagasaki, is a woodblock print that became popular in the Edo period. They often depict foreigners or foreign objects, such as ships. These prints illustrate the curiosity the Japanese held towards foreigners in their country, and were often bought by Japanese travellers during their stay to Nagasaki.