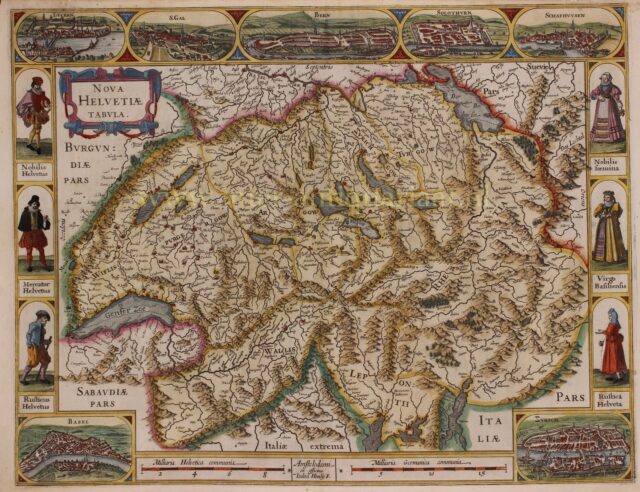 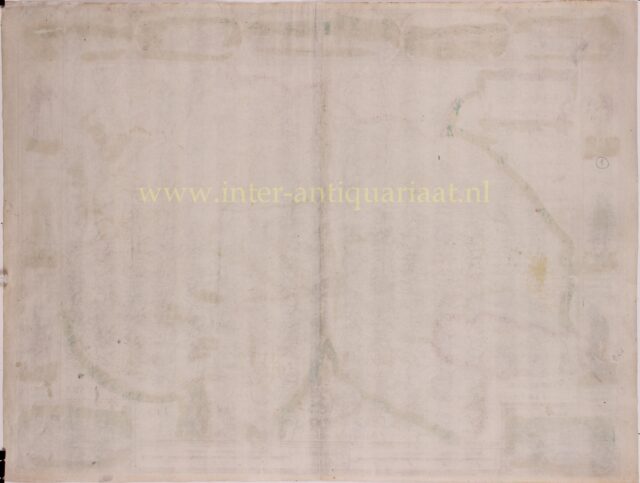 This beautiful map of Switzerland is framed with town views of Lucerne, St. Gallen, Bern, Solothurn, Schaffhausen, Basel and Zurich. In between depictions of the inhabitants of the time: a noble Helvetian, a merchant, a farmer, a peasant woman, a young urban woman and a noble woman.

Apart from explaining the Confederation’s organisation (“this country is its own and free and not subject to any potentates”), the author tells us (on a the back of of a slightly later edition of the map) that there is healthy air in the entire country and although the climate is harsh due to its height and mountains, the land is cultivated by the inhabitants “with constant labour” in such a way that it is barren nowhere. The land bears much grain and, moreover, “in many places it gives such a precious wine that it surpasses the Rhine wine by far in smell and strength.” The cattle also graze on fat pastures, with which the inhabitants make a great profit.

“The fright of the wild and dense woods is the reason that these remain empty and unvisited.” There is hardly anything to be told about the mountains of this land because these are known in the entire world. After all, who hasn’t heard of the Saint Gothard?

Unlike many surrounding regions, Switzerland experienced the 17th century as a time of peace and increasing prosperity. Neutrality was beneficial to the economy, allowing the confederation to supply other countries with goods. With the pensions of former mercenaries and commercial activity, capital was built up, that could be lent to neighbouring countries which were constantly at war. The Geneva bankers therewityh laid the foundation for an extensive European financial network.