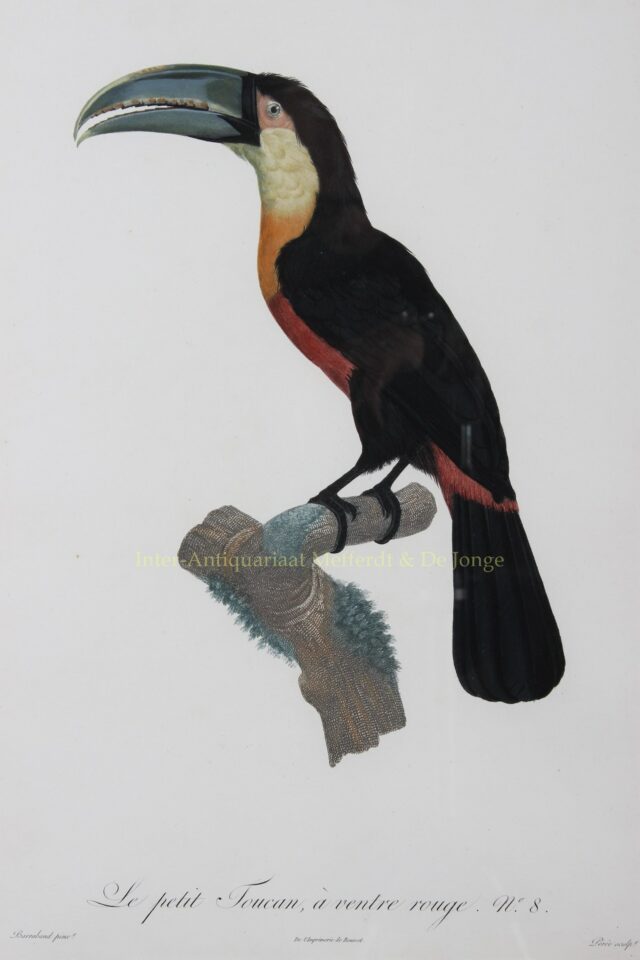 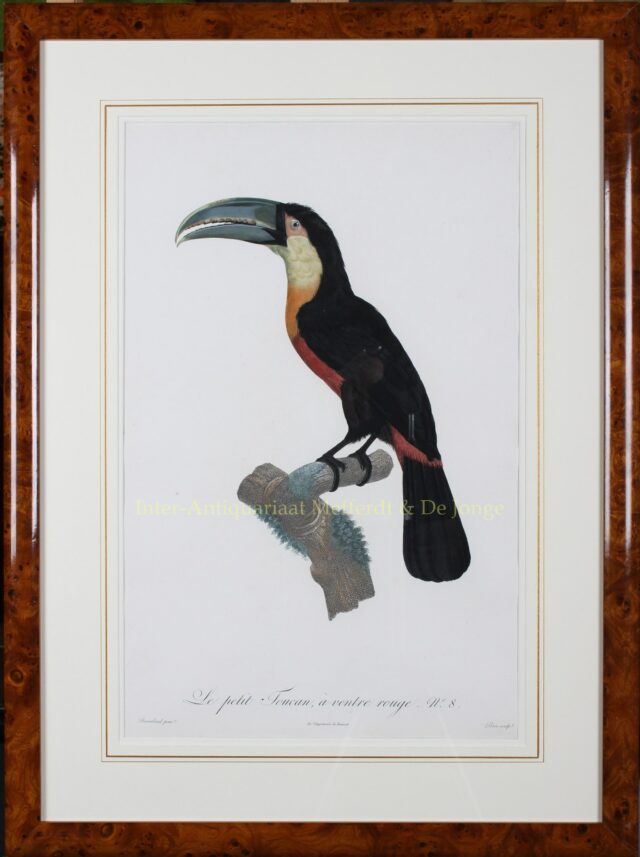 TOUCAN FROM LEVAILLANT’S MAGNIFICENT BIRDS OF PARADISE AFTER BARRABAND

Jacques Barraband‘s (1767-1809) watercolours and engravings of birds are masterpieces of French ornithological illustration. Most of his stunning portraits were done for the distinguished ornithologist François Levaillant (1753-1824), who commissioned the artist to illustrate his landmark works on African ornithology, including the lavish and striking Histoire Naturelle des Perroquets (1801-05). Images of African birds were popular in early 19th-century France both for their exoticism and for the interest in Africa that Napoleon’s campaigns were generating. The collaboration of Levaillant and Barraband represented a departure from previous ornithological texts in its emphasis on beauty and luxury, with sumptuously coloured and flawlessly rendered birds.

The project was a massive undertaking, which required over 300 finished watercolours. Apart from their undoubted beauty, they display a scientific accuracy that few ornithological artists have matched since. Still, the meticulous hand- coloured engravings in Levaillant’s publications could not match the delicate modulations of tone and  colour, the fine lines and perfect draftsmanship of Barraband’s original water colours, which are exceptional in their richness and tonal variation. Each feather is described by dozens of parallel lines, providing remarkable detail and naturalistically textured  colour.

Barraband had studied under Joseph Malaine and afterwards worked as a draftsman in the Gobelin tapestry works. He painted porcelains that were exhibited at the Paris Salons from 1798 through 1806, and records at Sèvres show that he supplied drawings to the factory there in 1806. He also decorated the dining-room in Napoleon’s Château de Saint-Cloud, but his work for Francois Levaillant was without doubt the climax of his career. His drawings for Levaillant’s splendid works placed him at the forefront of French ornithological artists at the beginning of the 19th century.

The red-breasted toucan (a.k.a. green-billed toucan), is a near-passerine bird in the family Ramphastidae found in southern and eastern Brazil, Pantanal of Bolivia, eastern Paraguay and far north-eastern Argentina. It is primarily found in the Atlantic Forest. Overall, it is fairly common. It is one of the smallest species of Ramphastos toucans, weighing 265–400 grams and measuring 40–46 cm long in total. Its beak is one of the shortest of Ramphastos toucans at only about 10 cm in length. Its breast is actually orange, with yellow at the sides. The beak is mostly pale greenish-horn.