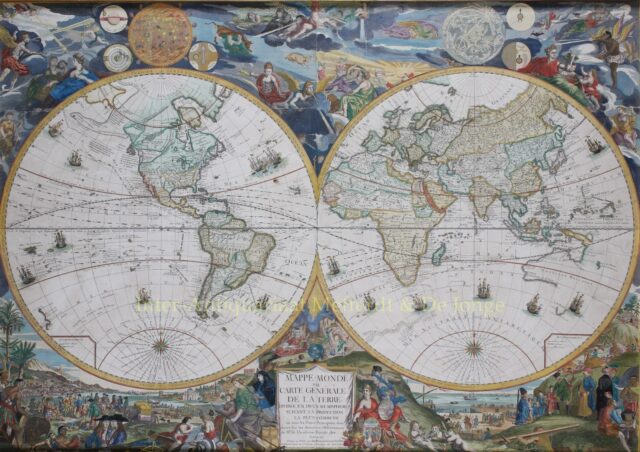 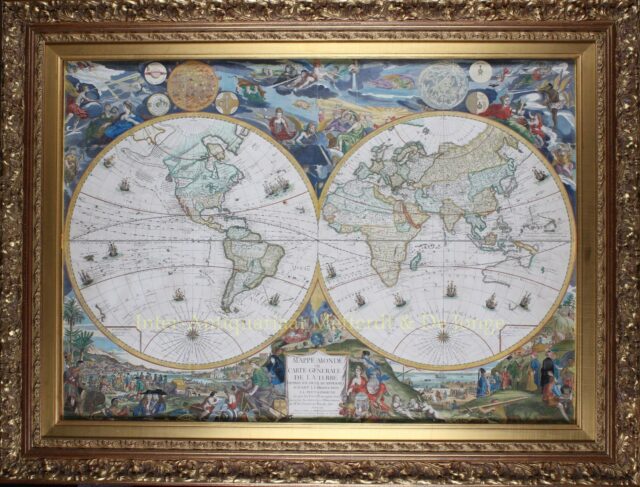 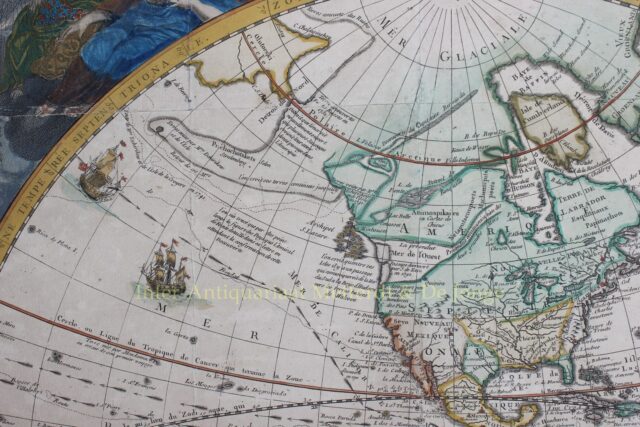 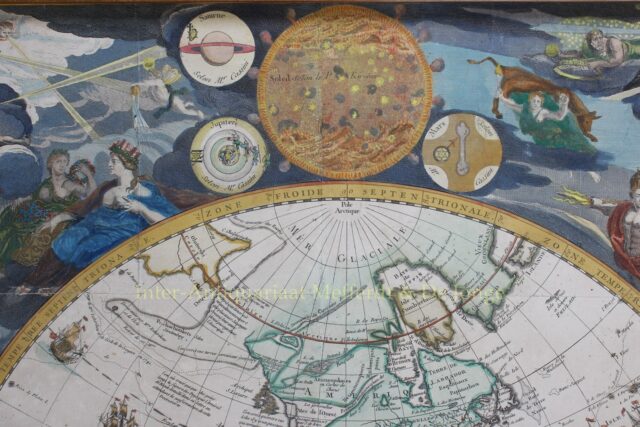 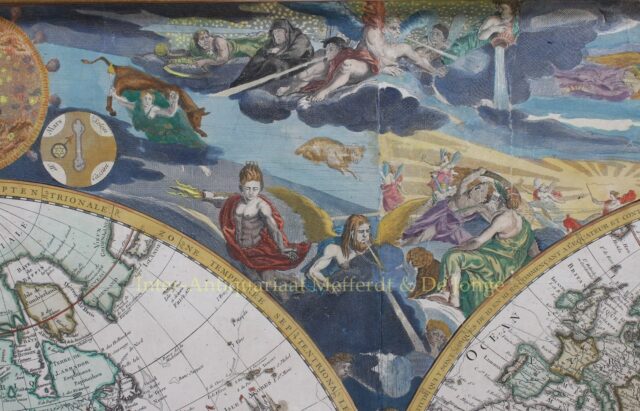 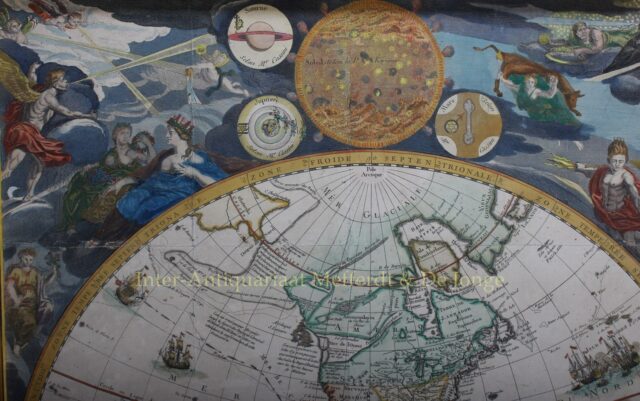 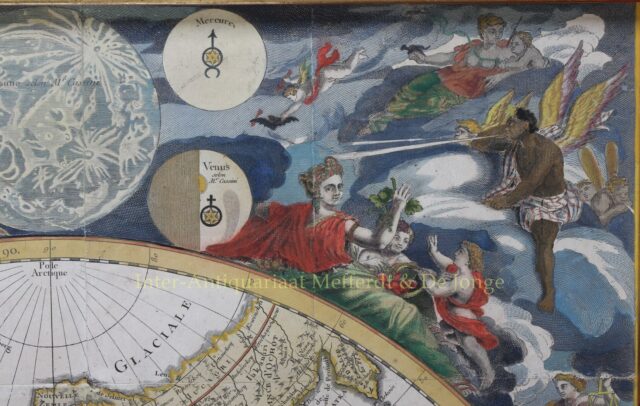 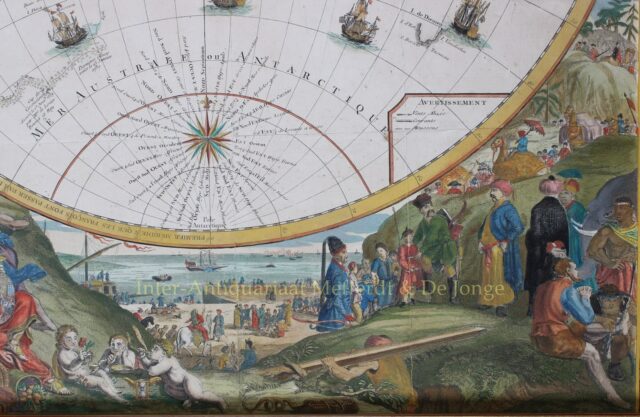 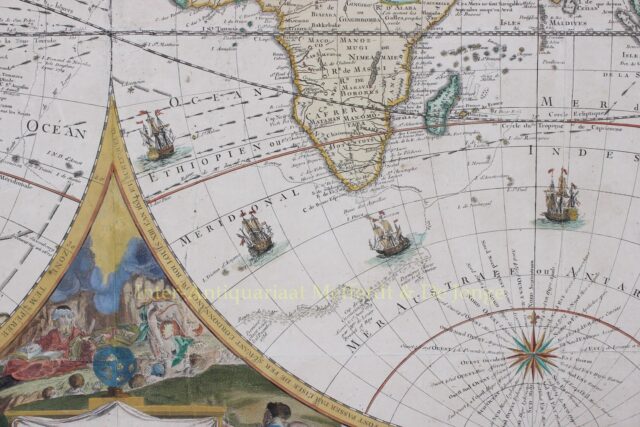 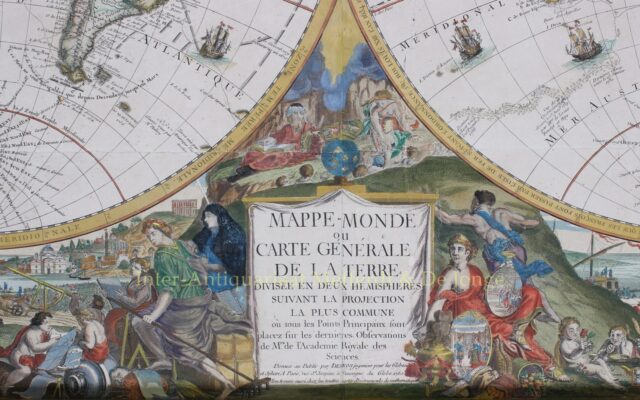 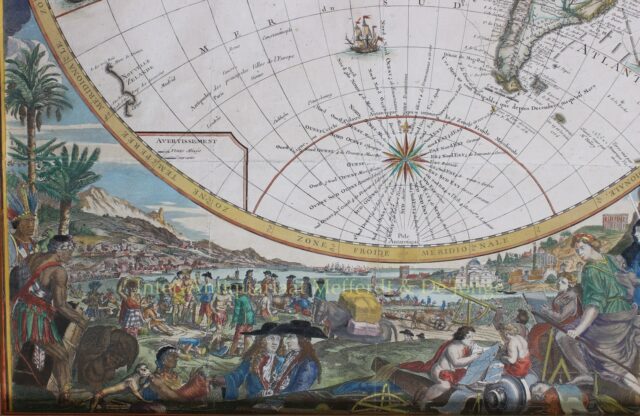 ONE OF THE MOST ICONIC FRENCH WALL MAPS OF THE WORLD

Nicolas de Fer, a prolific French cartographer, was active from the early 1690s until his death in 1720. He produced this outstanding four-sheet world map in 1694. The map itself was engraved by Hendrik van Loon but the work’s real merit lies in the decorative features which were designed and engraved by Nicolas Guérard. De Fer’s world map was extensively revised by his son-in-law Guillaume Danet in the mid-18th century, before being revised again by Desnos.

Compared to the first edition, 66 years earlier, the most significant cartographic update is in the Northwestern part of America, where it shows the Mer de l’Ouest, [Sea of the West] an imagined sea extending the navigable waters of the Pacific deep into the North American continent. Also a highly embellished depiction of the discoveries during Aleksei Chirikov’s voyage in 1741 is given. The prospect of both Northwest and Northeast passages are clearly depicted on the map, including a marvellous channel extending northeast from the Mer de l’Ouest. The depiction of Australia and New Zealand appears in the style popularized by the Dutch, which endured until Cook’s Voyages, which commenced shortly after the publication of this map.

The two hemispheres, as the expanded title relates, were  constructed from the observations made throughout the world by gentlemen of the Royal Academy in Paris.

The top and bottom borders are engraved in great detail. Along the top are pictures of Saturn, Jupiter, Mars, Venus after observations by Cassini, and two visual plans of the sun and moon. An expansive tableau displays gods and goddesses, zodiacal figures, winds and mythological scenes. The lower part of the map has scenes depicting mankind in all activities of trade, commerce, exploration, construction, scientific discovery, art and pleasure.

Literature: Rodney Shirley “Mapping of the World”, no. 560.