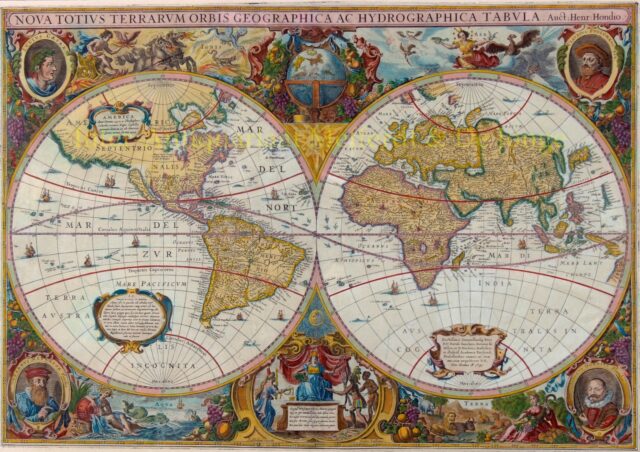 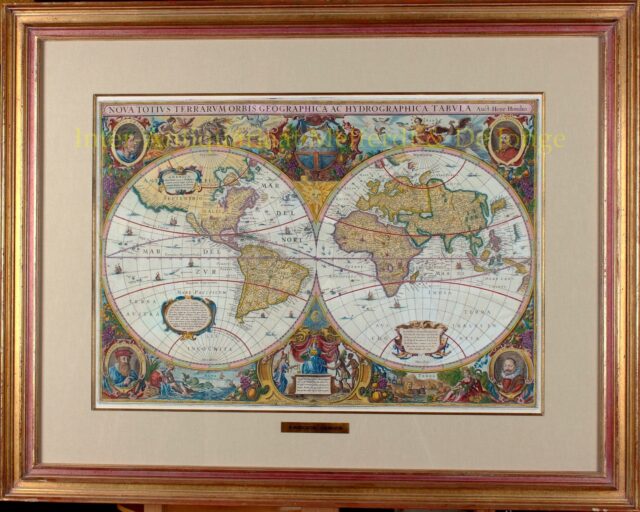 This is one of the most famous and most beautiful world maps from the first half of the 17th century. It was Hondius-Janssonius’ answer to competitor Blaeu’s world map. In 1630 Henricus Hondius and his son-in-law Johannes Janssonius published a reissue of the atlas compiled by (father) Jodocus Hondius with maps by Gerard Mercator. After the death of Henricus Hondius, Janssonius continues with the publishing house and puts his name on the copper plate of the world map.

The portraits in the corners of the engraving are (from top left, clockwise) Julius Caesar, Claudius Ptolemy (Greek geographer and astrologer, renowned for his maps copied in the 15th century), Jodocus Hondius (cartographer and founder of the publisher) and Gerardus Mercator (‘the father of modern geography’ and teacher of Jodocus Hondius).

Around the eastern and western hemispheres we see the elements: the god Apollo in his chariot with Phoenix and fire-breathing dragons depicting Fire (Ignis), the goddess Diana with birds and the wind as a depiction of Air (Aer), the goddess Abundantia with animals and the cornucopia represent the Earth (Terra), and Aquarius with water jug, shells and fish represent Water (Aqua). At the top center we see a celestial globe and the sun, at the bottom the moon and a mythological Europe receives gifts from Asia, America and Africa.

This map is the first atlas map to depict California as an island and has one of the earliest representations of Australia’s northwest coast.