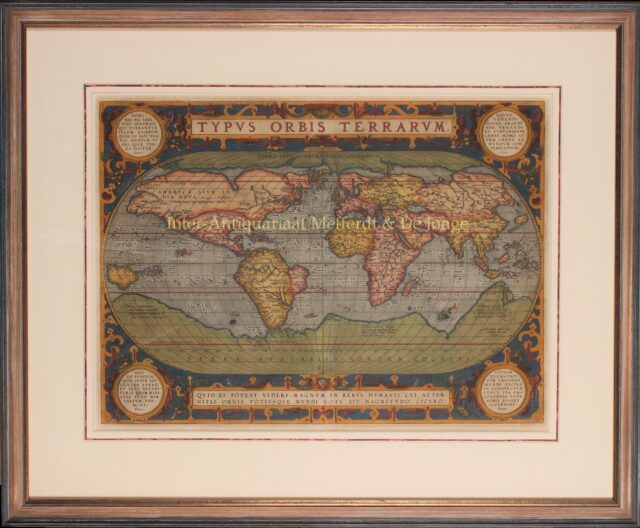 ONE OF THE GREAT WORLD MAPS OF ALL TIME

One of the most famous of world maps, from Ortelius’ great work, Theatrum Orbis Terrarum. Initially published in 1570, this volume was the first that could truly be called an ‘atlas’ in the modern sense of a compilation of maps engraved to a uniform format according to the most up-to-date information available.

The publication of the Theatrum also marked the inauguration of the era of Dutch supremacy in cartography. For these and other reasons, Abraham Ortelius is called the “father of modern cartography.” This particular map is based upon Gerard Mercator‘s large world map of 1569. Ortelius’ atlas project had the blessing and aid of Mercator, who supplied Ortelius with coordinates of places in America.

Although the map appears rather erroneous to modern eyes, it actually contains some of the best compilation work of the period, which was a hallmark of mapmaking in the sixteenth century.

In the north, islands are shown surrounding the North Pole, and separated from America and Asia by a sea passage, the latter being a popular belief in the sixteenth century. In the south, a large “Terra Australis Nondum Cognita” is drawn, separated from South America by the “Estrecho di Magallanes.” “From surviving correspondence it is known that Mercator generously encouraged Ortelius to make use of his published corpus of research; he also provided him with coordinates of places in America and perhaps elsewhere.” – Shirley

In 1587 Ortelius updated this seminal map for the third and last time. South America now assumes a more accurate shape, and the Solomon Isles are marked for the first time. The updated map is also distinctive and especially beautiful for the four medallions in the corners with classical texts, two from Cicero and two from Seneca. The border of this map is altered as well, now with a more intricate and elegant lattice of strapwork and swag.

Altogether with the embellishments, rich colour and important information, one of the great world maps of all time.