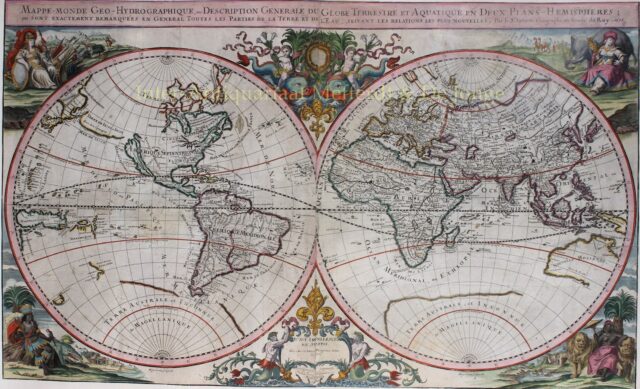 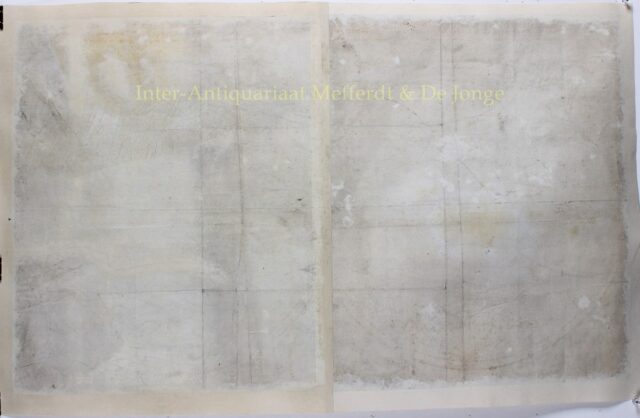 „Mappe-Monde geo-hydrographique.“ Rare, large, decorative double hemisphere map of the world, engraved by Sigmund Gabriel Hipschmann and published by Johann Hoffmann in 1675. Hipschmann copied Hubert Jaillot’s similar smaller world map from a year earlier, which in turn is based on the map of Nicolas Sanson made in 1651. Coloured by a later hand. Size: approx. 52 x 87 cm.

The corners of the map have allegorical figures representing the four continents: an Indian woman with a parrot and an alligator for the Americas, a woman holding the sun in her hands and an elephant for Asia, a black woman with a palm tree and two lions for Africa, and an armoured woman amidst weaponry for an ever belligerent Europe. Between the hemispheres at the top are two elaborate cartouches composed of cherubs riding dolphins with flowering banners. At the bottom a bold cartouche is flanked by two twin-tailed mermen.

The map shows California as an island (“Isle de Californie”), a “Terre de Iesso ou Ieco” extends from Japan to California. Only the East Coast of New Zealand is shown, along with an incomplete Australia, southern coast of Van Diemen’s Land and a tentative line of “Terre Australe et Inconnue” [the unknown Southern Continent]. The map distinguishes the Great Lakes, based largely on Jesuit reports, and mentions Lac Superior, Lac des puans [“Lake of evil smells” for Lake Michigan] and Mer Doux.