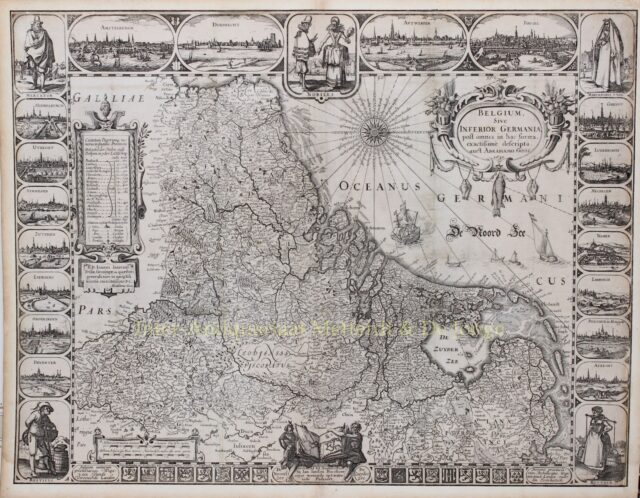 With the Fall of Antwerp in 1585, there was an actual separation between the Northern and Southern Netherlands and the 17 provinces split into two parts. A border was created by which the Seventeen Provinces were divided into the Dutch Republic and the Southern Netherlands.

Due to emigration and the political situation, the economic focus shifted to the north. While the Dutch Revolt against the Spanish continued, religion divided the entire continent into two parts. All of Europe was one a big battlefield and the conflicts were only resolved at the Peace of Münster in 1648, where (among other things) the Dutch Republic was recognised by Spain as a sovereign state and the separation of the northern and southern Netherlands was a fact.

Nevertheless, maps of the Seventeen Provinces were still being made regularly until about 1800. This was because of the huge cost of fieldwork and engraving that was necessary for the production of new maps, but also because of the unclear borders of the area in the east and the south of the Republic.

Abraham Goos in those days was active not only as a map engraver for the publishing houses of Claes Jansz. Visscher and the Hondius family, but also engraved on his own account. In 1616 Goos published his Nieuw Nederlandsch Caertboeck, a small atlas of the Seventeen Provinces in 23 maps. Our map of the Seventeen Provinces, was engraved and published by Abraham Goos in 1618 as a single-sheet map.

The title appears in an oval cartouche in the upper right corner, decorated by two cornucopia and a few fishes hanging from a line. The imprint appears in the centre along the lower edge, crowned by two sitting allegorical figures representing the North Sea and the Zuyder Zee. The figures are holding an open atlas, symbolising Goos’ address int Vergulde Kaertboeck [At the sign of the Guilded Atlas] mentioned on the first state.

Along the left border there is an upright rectangular cartouche consisting of two panels. The upper part contains the number of towns and villages per province and a legend giving the symbols used in the map. The lower portion of the cartouche has a dedication to Jan Hendrick Jarichs van der Ley, a pioneer in using mathematics in navigation at sea, signed by Abraham Goos. In the lower left there is a simple cartouche with two distance scales. The North Sea is decorated by a 32-point compass card with Dutch names, and various ships.

The map is framed on four sides. In the broader top a couple of nobles is flanked by town views of Amsterdam, Dordrecht, Antwerp and Brussels. At the top of the left border there is a merchant , and views of Middelburg, Utrecht, Nijmegen, Zutphen, Leeuwarden, Groningen, Deventer and a famer depicted below. In the right border we see a merchant’s wife with views of Ghent, Luxembourg, Mechelen (Malines), Namen (Namur), Limburg, Bergen (Mons), Atrecht (Arras) and a farmer’s wife.

In the bottom border there are the coats-of-arms of the Seventeen Provinces.

In all four states of the map only the imprint and/or date is altered, the decoration and the map itself remain unchanged.