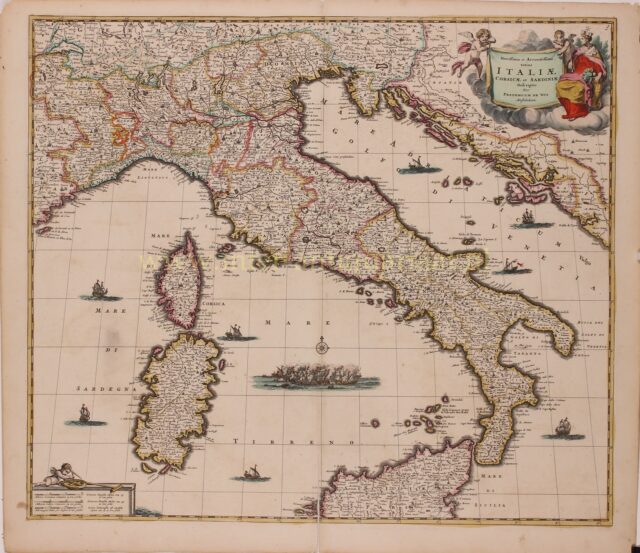 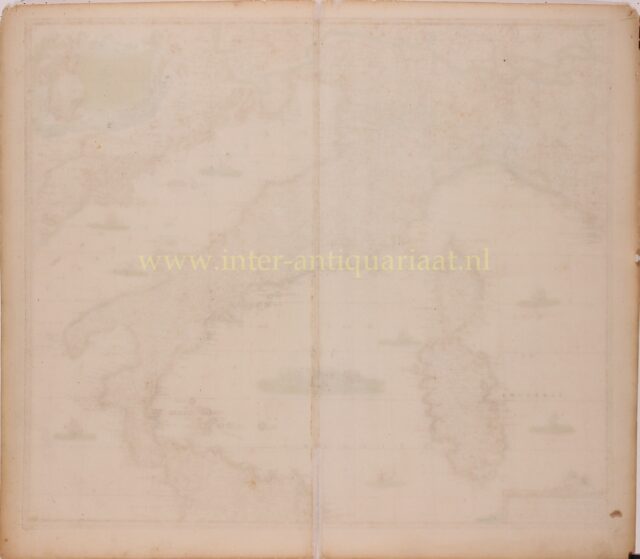 The map covers the entire Italian peninsula, including the Dalmatian coast, which was then part of the Republic of Venice. We also see Corsica and Sardinia and part of Sicily.

The 17th century was a tumultuous period in Italian history, marked by deep political and social changes. Despite important artistic and scientific achievements, such as the discoveries of Galileo in the field of astronomy and physics and the flourishing of the Baroque style in architecture and painting, Italy experienced overall economic decline.

Effectively, in spite of Italy having given birth to some great explorers such as Christopher Columbus, Amerigo Vespucci and Giovanni da Verrazzano, the discovery of the New World undermined the importance of Venice and other Italian ports as commercial hubs by shifting Europe’s center of gravity westward towards the Atlantic. In addition, Spain’s involvement in the Thirty Years’ War (1618–48), financed in part by taxes on its Italian possessions, heavily drained Italian commerce and agriculture; so, as Spain declined, it dragged its Italian domains down with it, spreading conflicts and revolts.

The Black Death returned to haunt Italy throughout the 17th century. The plague of 1630 that ravaged northern Italy, claimed possibly one million lives, or about 25% of the population. The plague of 1656 killed up to 43% of the population of the Kingdom of Naples. The dramatic reduction in Italy’s urban population (and, thus, in economic activity) contributed to Italy’s downfall as a major commercial and political centre.

After the War of the Spanish Succession (1701-1713), Spain would lose much of its territory in Italy to the Austrian Habsburgs, making Austria the dominant power in Italy.

The map is richly decorative, with a beautiful allegorical cartouche in the upper right featuring “Italia Turrita e Stellata” the national personification  of Italy, a woman with her head surrounded by a mural crown completed by towers (hence turrita or “with towers” in Italian) the Stella d’Italia (“Star of Italy”), carrying a cornucopia and staff (sybolizing power).