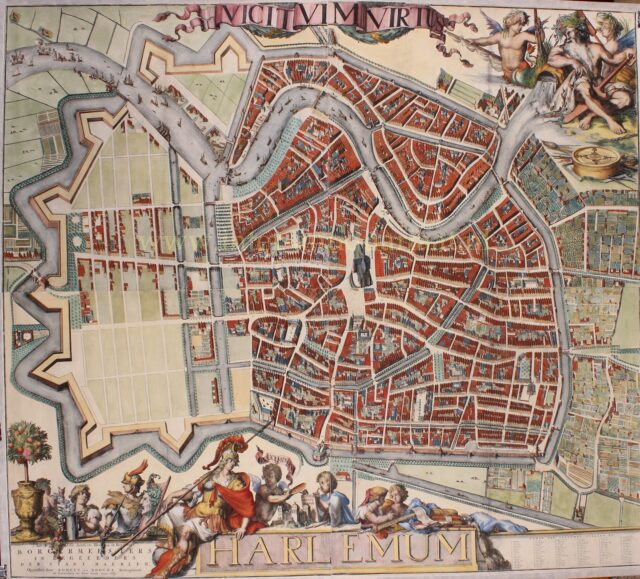 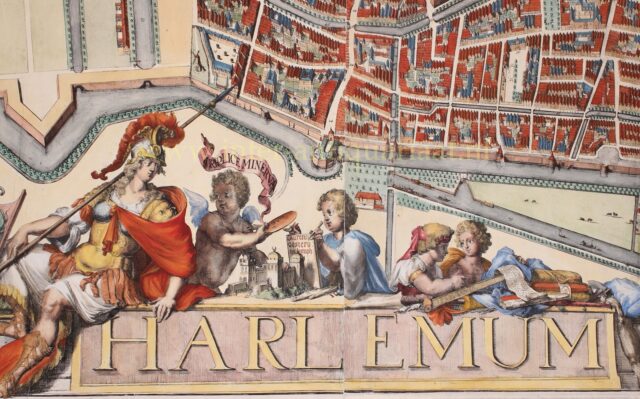 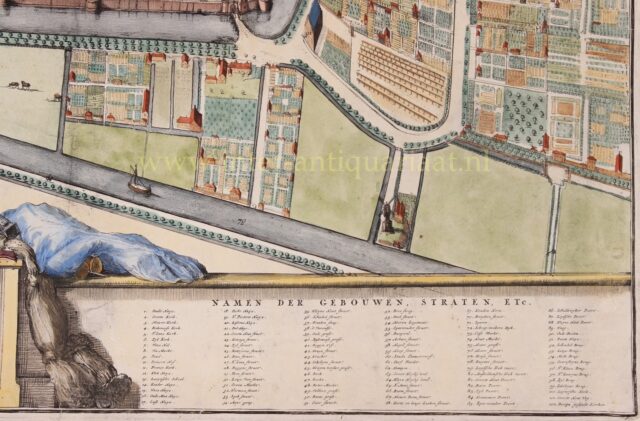 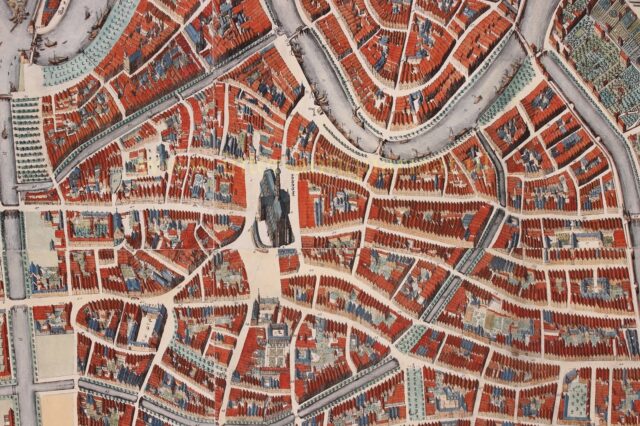 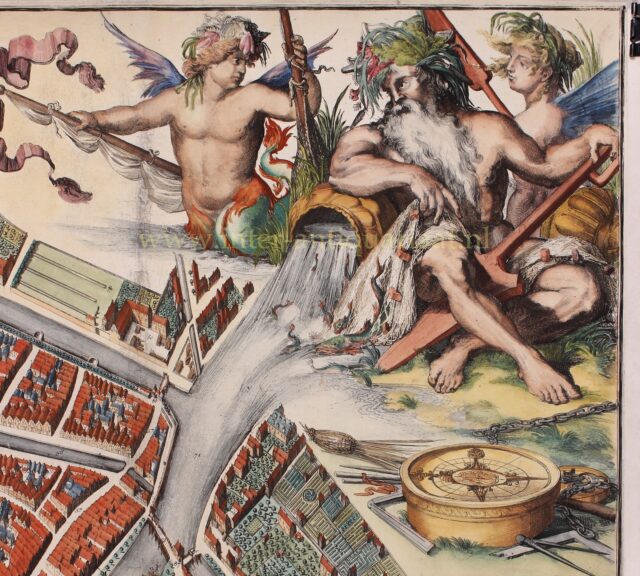 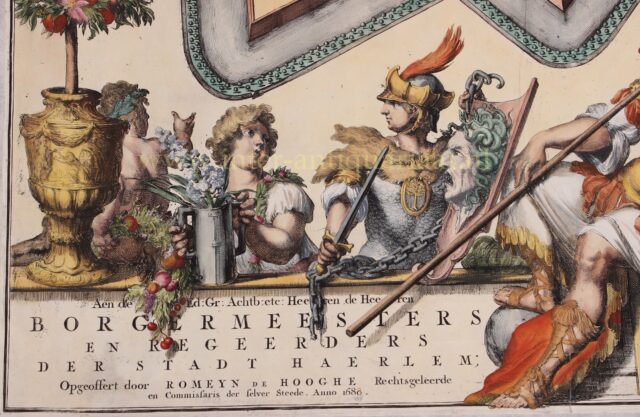 LARGEST, IMPORTANT AND MOST BEAUTIFUL MAP OF HAARLEM

Making a large wall map had a lot to do with emphasizing the importance of a city. Usually, there was also a more direct trigger such as a recently started or completed expansion of a city, or the fact that there was competition with another city. Wall maps were made of Amsterdam, Rotterdam, The Hague, Leiden, Delft and Haarlem. Making such a map was an enormous project. A surveyor had to measure the city anew, after which he could draw a visually attractive map. This manuscript map then had to be transferred to a copper plate by an engraver or etcher. Other artists were often hired to make the decorations. Then, all the plates had to be printed, assembled, possibly coloured with watercolour and finally put into a frame or put onto linen. Altogether this would take several years of labour and total costs for 100 to 150 copies would amount to 1.500 – 2.000 guilders.

Romeyn de Hooghe, based in Haarlem, had his city measured and started to make the map. De Hooghe wanted to decorate the plan with a panorama, churches, city gates and other prominent buildings and proposed to have it engraved in order that it could be printed. He asked the map to be dedicated to the mayors. The mayors agreed to accept the dedication and, if he would publish the map at his own expense, buy 100 copies for 12 guilders each.

The fact that the people of Haarlem were working on the Nieuwe Uitleg [New Expansion], the enlargement of the city on the north side, has also influenced the city council to commit to a new map. Such an expansion again made the city more important and should be demonstrated. Also in Leiden, the enlargement of 1659 had been an important factor for the making of the large map of 1670. This map of Haarlem is therefore the earliest map to show the Nieuwe Uitleg.

Plans for urban expansion had existed since 1642. In 1671, the construction of the new area actually started. The extent to which they had advanced with the construction in 1688, can be seen on De Hooghe’s map. When he made the map, he lived in this new part of town himself. Already from 1681 he spent a large part of the year in Haarlem in De Hooge Hulst, a house on the Wijde Geldeloze pad that he had inherited from his uncle, just outside the city on the south side. In 1687 he settled permanently in Haarlem and the following year he had a house built on the south side of the Nieuwe Gracht (then called Herengracht) overlooking the construction. We can therefore assume that he mapped the new area of town very precisely.

Comparison with other maps from before and after De Hooghe’s time, show that also the older part of town is depicted very accurate. There are, of course, inaccuracies in De Hooghes work, but these are inevitable in a map which was made from a bird’s eye perspective. The backsides of houses and the dimensions of gardens could of course not be shown exactly, but the number of houses and the type of façades (stepped gables or side walls) for each block are correct. When researching building history in the city centre of Haarlem, De Hooghe’s map is the most reliable, before cadastral measurements were conducted in the beginning of the 19th century.

De Hooghe put a large number of trees on the map, along canals, streets and ramparts. These are also believed to be depicted correctly. The trees of the city were not only considered beautiful in those days, but also served a purpose. With storms they broke the wind and prevented damage to houses, something rather important in the still bare area of the Nieuwe Uitleg.

The map of Haarlem was published in 1689. The city council decided that the copies they wanted to give as gifts would have to be coloured. In 1690, De Hooghe received more than fl. 1.006 for maps, linen, frames and colouring, and in 1691 he was paid another fl. 328 for the colouring of 12 maps with carved and gilded frames. The city council therewith owned one hundred copies of the map for nearly 1.350 guilders. The copper plates – and the right to make more prints and sell them privately – stayed with De Hooghe.

This map of Haarlem by Romeyn de Hooghe is a magnificent piece of work. Our copy concerns only the map of the city itself, without the separately printed panorama, town views and city councillors’ coats of arms. Less than two dozen maps are presumed to have survived (combined that is, first and second state copies, with and without additional views).